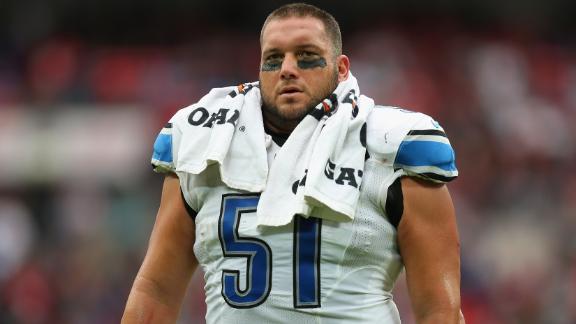 FOXBOROUGH, Mass. -- The Lions were lined up in a kneel-down formation on the last play of Sunday's 34-9 loss to the Patriots when Detroit center Dominic Raiola snapped the ball, then dove at the legs of New England defensive lineman Zach Moore.

After the game, at least one Patriots player took issue with Raiola's play.

"I didn't see anything. I just heard what happened, but that was stupid," Patriots defensive tackle Vince Wilfork said. "I didn't see it, but from what I heard ... you're taking a knee. They'd get mad if we were just to blow up one of their players, so I mean, it's just uncalled for.

"But at the same time, you always have to protect yourself, so you always have to play with your neck on a swivel and being alert for 60 minutes, and it came down to it today on a boneheaded play like that. Luckily no one got hurt and we can move on."

Raiola offered no apologies after the game and said he was just continuing to play football -- much like New England was doing by scoring after the two-minute warning with the Patriots comfortably ahead 27-9.

New England had been given a first down at the 1-yard line after a personal foul penalty on Detroit defensive lineman C.J. Mosley wiped away Stephen Gostkowski's field goal. So instead of kneeling, the Patriots continued running plays.

"I cut him. We took a knee, so I cut the nose," Raiola said. "They went for a touchdown at two minutes; they could have taken three knees and the game could have been over.

On Monday, Patriots coach Bill Belichick chalked it up to frustration.

"I'm sure there was a lot of frustration there from Raiola," he said. "That was obvious. He's never beaten us. He had a tough day in there dealing with Wilfork and [Dont'a] Hightower and those guys. I'd say that was probably frustration. We saw a lot of that at the end of the game -- [Tahir] Whitehead on [LeGarrette] Blount's touchdown, Mosley on the personal foul on the field goal."