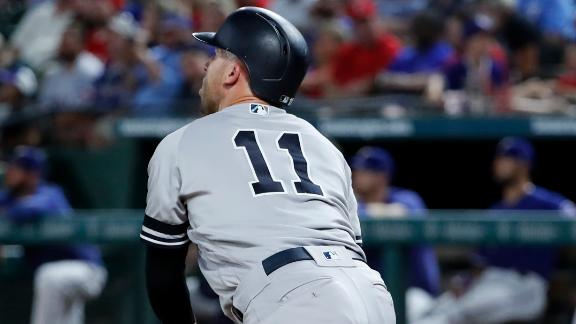 ESPN
ARLINGTON, Texas -- While injuries have been a pain in the rear for the Yankees, they're hopeful a tight muscle in James Paxton's buttocks won't be an issue in the playoffs.

The left-hander was removed from his final start before the postseason after one inning, overshadowing six home runs by New York in a 14-7 victory over the Texas Rangers on Friday night that gave the Yankees 103 wins for the first time in a decade.

Paxton had won 10 consecutive starts, a career best. He allowed Danny Santana's two-run homer in a 21-pitch first. At the end of the inning Yankees manager Aaron Boone, pitching coach Larry Rothschild and head athletic trainer Steve Donahue conferred in the dugout, and Ben Heller relieved in the second.

"Just when I was warming up, felt a little bit of tightness there, a little discomfort," Paxton said. "I think I could have kept going, but they wanted to play it safe and have me completely rested for what comes next."

New York's plans for the Division Series against Minnesota include a rotation with Paxton, Masahiro Tanaka and Luis Severino, scheduled to make his third start Saturday after recovering from a lat injury that had sidelined him since spring training.

"I'm not worried about that," Boone said when asked where Paxton slot in. "I would expect him to kind of prepare depending on when we slot him, have his normal sides and everything, and I don't think this will really alter that too much."

Catcher Gary Sanchez returned after missing 10 games with left groin tightness. Sanchez struck out in all three plate appearances and came out after five innings, as planned.

"I feel good, healthy," Sanchez said through a translator. "I feel like I was able to block, move around, have the flexibility I wanted. It felt good."

New York held off on slugger Edwin Encarnacion's return from a left oblique injury. Boone said the concern was a tweak of the injury that could sideline the 36-year-old for the playoffs, and Encarnacion missed his 12th straight game.

"He hit before again on the field really good, but I just think mentally he's probably not quite over that hump where he needs to be," Boone said. "Ideally, we'd love to get some at-bats this weekend, but it's not the most important thing."

Giancarlo Stanton, Cameron Maybin, Brett Gardner, Gio Urshela, Mike Ford and Austin Romine homered in the opener of the final series in the Rangers' 25-year-old ballpark. The Yankees lost out on home-field advantage throughout the AL playoffs to Houston, but raised their major league record total to 305, two more than Minnesota.

"We're definitely keeping track," said DJ LeMahieu, who hit a three-run double that skipped past Willie Calhoun in left field to raise his RBI total to 102, his first time in triple figures.

Stanton, limited to nine games before coming back from the injured list on Sept. 18, was 3 for 3 with two walks and three RBI, and is 7 for 21 with two homers in seven games since his return.

Ford had a career-best four RBI, and Gardner extended his career best with his 28th homer.

"If you miss over the middle of the plate, they're going to do damage," Rangers manager Chris Woodward said. "And they're really good at hitting mistakes off the barrel."

Michael King, a 24-year-old right-hander making his major league debut, was the only New York pitcher to get more than three outs. He allowed an unearned run on his error in two innings.

Rookie Joe Palumbo (0-3) allowed three homers and struck out seven in three-plus innings as the Rangers lost for the 10th time in 12 games.

Urshela, who missed Wednesday's game in Tampa Bay after he was hit on his left hand by a pitch in the road trip opener, singled in the fourth inning to end an 0-for-19 slide. Luke Voit was 0 for 5 with three strikeouts, extending his slump to 1 for 30.

The six homers by the Yankees were the 34th time this season that a team has hit at least that many. That equals the combined total of the seasons with the second and third most instances (18 in 2003, 16 in 2017).

Severino (1-0, 0.00 ERA) has thrown nine scoreless innings in two starts since returning. He got his win in his second start, striking out nine in five innings against Toronto in New York's final regular-season home game. Texas will go with reliever Luke Farrell (1-0, 2.38) as an opener.