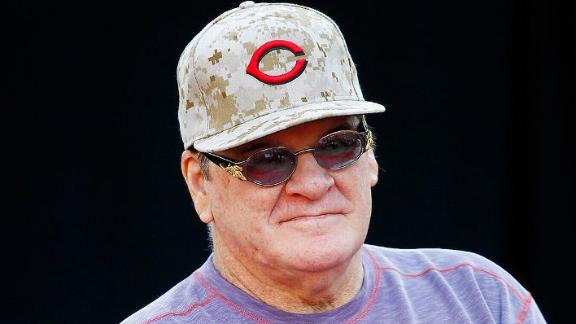 On the day that Pete Rose made his return to managing in a one-day stint with the independent Bridgeport Bluefish, 25 years after he last managed the Cincinnati Reds, MLB's career hits leader said he remains optimistic that his lifetime ban for betting on baseball will one day be lifted.

"I've waited 25 years, but I've done so because I was the one who screwed up," Rose told ESPN.com. "And if I were given a second chance, I would be the happiest guy in the world."

On Jan. 24, 2015, MLB commissioner Bud Selig, who has not ruled on lifting Rose's ban since he applied for reinstatement in 1997, is retiring. Rose was banned from the game in August 1989.

"I haven't given up on Bud," Rose said. "I'm not glad he's leaving. He has a love for the game and has been good for it. If the next guy is his best friend, I don't expect he'll just turn me loose, but if he isn't, I hope he has an open mind."

Rose spends 20 days a month, for four and a half hours a day, sitting inside a Las Vegas store called the Art of Music on the strip signing autographs. Items cost between $80 and $800, Rose said, which includes some quality talking time with the slugger.

"I know there's a lot of people who want to give me a second chance because they wouldn't be stopping and paying for my autograph if they didn't think so," Rose said.

He managed the Bluefish to a 2-0 win over the Lancaster Barnstormers on Monday night.

Rose, who resides in Las Vegas, says he still bets, though he says he hasn't bet on baseball in a "very long time."

"I only bet on events that I am watching," Rose said. "I watch the horses. I was a big fan of [Triple Crown hopeful] California Chrome."

Despite being banished from the game, Rose has managed to make money by signing autographs and doing endorsement deals, including a recent shoe deal with Skechers and a deal with a daily fantasy league called SportsBeep.

SportsBeep is using Rose in a video to try to raise money through Indiegogo for a new app.

"So many Americans play fantasy sports, and this is a legal way to try to make some money every day," said Rose, who has equity in the company, which is trying to raise $500,000.

The daily fantasy game business is exploding. One of the market leaders, FanDuel, recently reported that it took in $26.4 million in entry fees and gave out $24.4 million in prizes in May.

Rose heads up to Cooperstown for every Hall of Fame induction weekend to sign autographs and has seen the attendance decline as baseball's performance-enhancing drug era has kept those with the most promising stats out of the building. He hopes even that could provide him with a chance to get in.

"It doesn't look like guys like [Barry] Bonds and [Roger] Clemens are ever going to make it in," said Rose. "That can't be good for the business of the Hall of Fame."

Rose Hasn't Given Up On Getting Ban Lifted
Darren Rovell discusses why Pete Rose is optimistic that his lifetime ban for betting on baseball will one day be lifted.