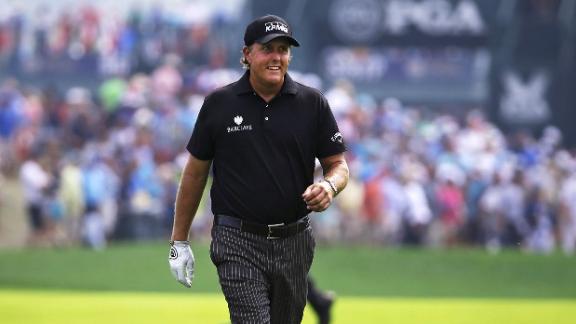 Phil Mickelson is finding a way to pass an extended break from the PGA Tour -- helping his brother, Tim's, Arizona State golf team.

Arizona State officials confirmed that Mickelson is in the process of becoming an interim assistant coach for the Sun Devils, where he won three individual titles as a player. An official announcement is forthcoming.

Golfweek first reported the arrangement, which allows Mickelson to spend time talking to and playing with team members while also calling potential recruits. As an alumnus of the school and a program donor, Mickelson would be otherwise prohibited from those tasks because of NCAA rules.

An ASU official stressed that Mickelson is not being added as a temporary or volunteer coach. Tim Mickelson has had an opening on his staff since September, when Joe Prince left the school. He has elected to fill it on an interim basis with his brother, a five-time major champion with 42 PGA Tour titles.

Tim Mickelson is in his fourth season as coach at ASU, where Phil Mickelson won three NCAA individual championships and helped the Sun Devils capture the 1990 team title.

The 44-year-old Mickelson, who turned pro in 1992, is not expected to resume his PGA Tour schedule until late January.

But according to the Sydney Morning Herald, Phil Mickelson got a jump on his duties when he called a top Australian junior player, Ryan Ruffels.

"I thought one of my mates from school was giving me a prank call," Ruffels told the newspaper. "We chatted for an hour and I'm just starting to get some exposure to those big players and it's great."

Ruffels, 16, a high school junior, is one of Australia's top amateurs and has been compared favorably to countryman Jason Day. He's met Adam Scott and Rory McIlroy and finished in the top 25 a year ago at the Australian Open.