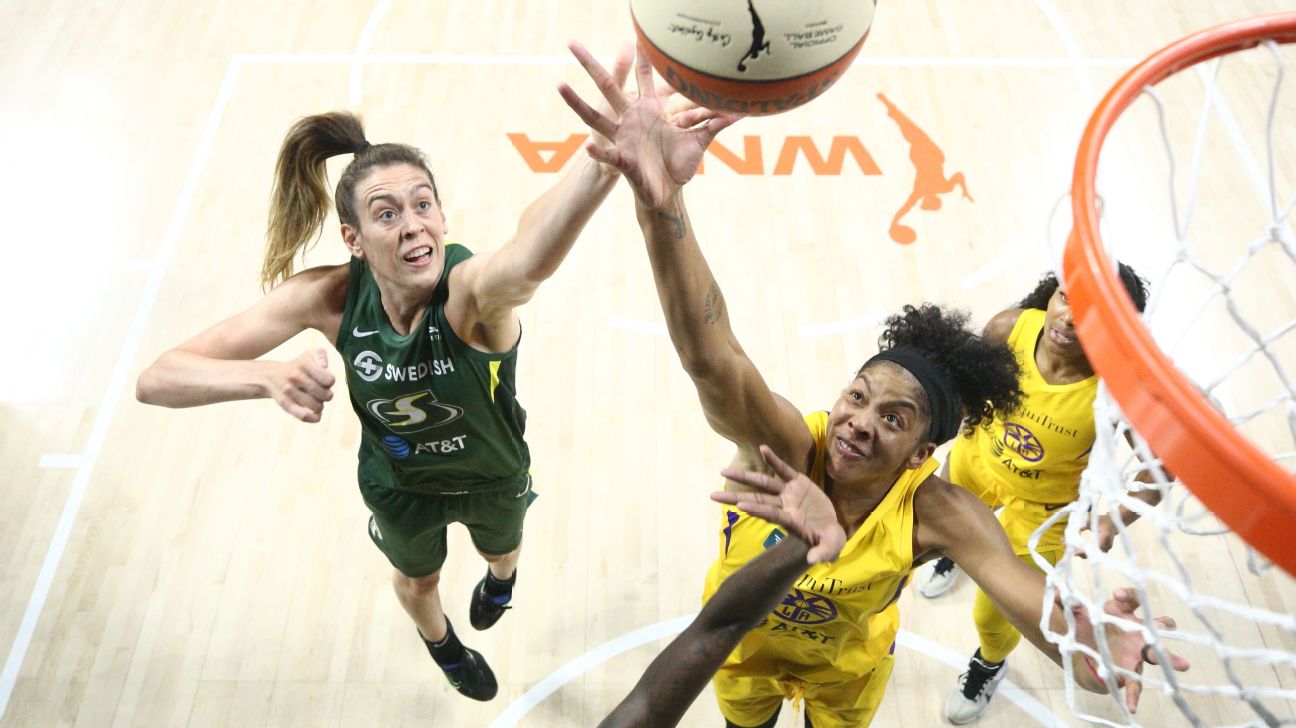 This might be a shortened season in the WNBA bubble in Bradenton, Florida, but it didn't feel short on talent.

The Seattle Storm's Breanna Stewart and the Las Vegas Aces' A'ja Wilson -- both of whom are former No. 1 picks and winners of the Rookie of the Year award -- have led the way this season and headline ESPN.com's All-WNBA First Team. Both Stewart, 26, and Wilson, 24, are in contention to be the league's MVP in 2020.


But they're just two of four unanimous first-team picks. Who else made the cut? And which five rookies shined brightest during the 2020 WNBA season, a 22-game sprint that concludes Sunday?

(All player analysis written by Mechelle Voepel; * denotes unanimous pick by our panel.)

A year ago, Stewart was rehabbing a torn Achilles tendon. Now she's once again an MVP candidate, and is averaging 30.4 minutes. An elite player at both ends of the court, Stewart is second in the league in win shares (3.8) and first in defensive win shares (1.9). Her scoring average is a bit below her 2018 MVP season, but her assist average is improved. She and her teammates will tell you she's an even better player now.

Wilson, also a top MVP candidate, is on the verge of becoming just the fifth player in WNBA history to average 20 or more points in at least two of her first three seasons. In addition to her offense, she is also an exceptional defender and currently leads the league in average blocked shots per game. "Her defense has really improved dramatically," Aces coach Bill Laimbeer said.

At 34, the two-time MVP again is in the mix in that discussion. She leads the league in rebounds (204) and rebounds per game, and she's third in defensive win shares (1.6). Though she has always been a brilliant offensive player, her commitment to defense this season has also stood out and is a key part of the Sparks' success.

Ogunbowale made a great case for WNBA Rookie of the Year last season, but it went to Minnesota's Napheesa Collier. No matter, Ogunbowale has come back with an even better second season as the league's leading scorer. Her usage rate is about the same as last season (30.8), but her true shooting percentage (52.1) and effective field goal percentage (46.6) both have improved.

The Sky have struggled down the stretch run, but Vandersloot has continued to be the league's top playmaker. She's on pace for both the highest scoring and assist averages of her career. She set the single-game assist record (18) this season, and she has the most games of at least 15 assists (five) of any player in WNBA history.

With Sylvia Fowles out all but seven games this season, Collier has had to step forward in production and leadership. Her ability to play both the power forward and small forward positions so well has helped Minnesota a lot in her two seasons. She has seven double-doubles this year, and leads the Lynx in minutes played.

One of the top candidates for Defensive Player of the Year, she can guard any position. And she has had to, especially with Jonquel Jones opting out this season. Thomas leads the Sun in rebounding and assists, and is their second-leading scorer. Statistically, she's having the best of her seven seasons in the WNBA.

After 10 seasons with Phoenix, Bonner has fit in perfectly with the Sun. They got off to a rough 0-5 start, but fought back to be a playoff team. Bonner has paired well with Alyssa Thomas, and the Sun have relied on both of them. Bonner and Thomas are both in the top 10 in the league in win shares at 3.2 each.

Diggins-Smith has led the Mercury in minutes played, and her steadying influence has been crucial for Phoenix. In her first year with the Mercury after sitting out last season on pregnancy leave, Diggins-Smith is shooting a career-best 48.5% from the field, and 41.1% from 3-point range. Despite the shortened season, she's only five off tying her career high in 3-pointers.

Limited to six games last year and turning 38 this summer, Taurasi was no guarantee for a strong season. But she and fellow guard Skylar Diggins-Smith have stepped forward after center Brittney Griner left the WNBA bubble for personal reasons. And scoring a season-high 34 points while honoring Kobe Bryant on his birthday by wearing his jersey was peak Taurasi.

Allemand, who is from Belgium, was first drafted into the WNBA in 2016 but wasn't ready yet. This year, she was. Allemand, who turned 24 in July, isn't a professional rookie, but is in her first season at the WNBA level, and has proven herself a good fit. She is second in the league in assists per game to Courtney Vandersloot.

She missed six games after suffering an ankle injury early in a game on Aug. 10, and that stretch took away some of her Rookie of the Year momentum. But she showed multiple flashes of being a game-changing type player during this season, including a 35-point performance against Seattle, and two games in which she scored 26 points.

The No. 16 pick in the second round, Dangerfield's consistency has made her the Rookie of the Year favorite. If she wins the award, she'll be the lowest draft pick to do so. The lowest to this point was No. 7 (Tracy Reid) in 1998. Dangerfield is shooting 47.1% from the field while leading the playoff-bound Lynx in scoring and assists.

The Liberty have been Team Rookie this season with seven on the roster. But the most heralded, No. 1 pick Sabrina Ionescu, suffered an ankle injury in her third game that ended her season. Jones, the No. 12 pick, has been the best of the New York rookies. She brings good size and quickness to the perimeter. In a growth year for the Liberty, she grew a lot.

She is the only non-guard on our rookie team, and the Wings have to like what they have seen from the No. 2 pick. Her season high in scoring was 28, and she has had five double-doubles. About the only place she has struggled has been beyond the 3-point line (19.7%, 13 of 66), but give her time -- that will come around, too.