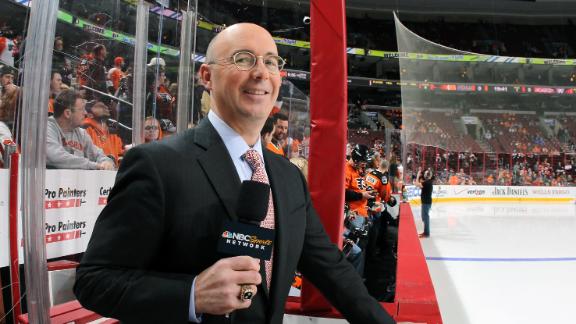 NBC hockey analyst Pierre McGuire is a candidate to become general manager of the Pittsburgh Penguins.

"Yes, I can confirm there have been discussions with Pens management," McGuire told Toronto's TSN radio affiliate, according to the Pittsburgh Post-Gazette.

The potential hire would reunite McGuire with the Penguins. He served as a scout for the team in 1990, then was an assistant under coach Scotty Bowman as Pittsburgh won Stanley Cup titles in 1991 and '92.

The Penguins fired Ray Shero as general manager last month after they were ousted in the Eastern Conference semifinals by the New York Rangers, the team's latest playoff shortcoming.

Pittsburgh, though, opted to retain coach Dan Bylsma, saying his status would be evaluated. Bylsma is 252-117-32 since taking over the Penguins in the middle of the 2008-09 season.

"Management, and ownership in particular, had higher expectations over the last five years for the team that hadn't been realized," McGuire said in the radio interview. "That's when change happens, or when they decided to make the change.

"It's been a pretty fluid process throughout the last 10 days to two weeks."

McGuire is one of several candidates the Penguins have spoken to about the job.