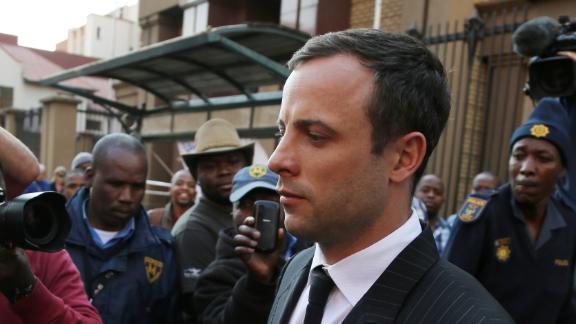 PRETORIA, South Africa -- The judge in the murder trial of Oscar Pistorius said Friday that she will give a verdict on Sept. 11, bringing closer to an end a globally televised five-month trial that has transfixed South Africans and others around the globe.

Judge Thokozile Masipa made the announcement after the prosecution and defense ended their final arguments. Masipa will decide with the help of two legal assistants if the double-amputee athlete should face prison for killing Reeva Steenkamp on Valentine's Day last year in his home.

If found guilty of premeditated murder, Pistorius could face 25 years and up to life in prison.

Pistorius said he mistakenly shot Steenkamp through the closed door of a toilet cubicle, thinking there was an intruder in his home. The prosecution alleges the world-famous runner intentionally killed her after an argument.

"The accused intended to kill a human being," chief prosecutor Gerrie Nel said at the end of closing arguments. "There must be consequences."

Nel has urged the judge to dismiss Pistorius' entire story as an elaborate lie and to convict him of premeditated murder. South Africa does not have trial by jury, nor does it have the death penalty.

Pistorius could also be convicted of a lesser murder charge or negligent killing, both of which call for years in jail. Masipa could acquit him if she believes he only made a tragic error.

In the prosecution's final arguments, Nel accused the once-celebrated Paralympic champion of being an "appalling witness" who was constantly "deceitful" during his testimony to try to cover up a murder after a fight between the couple.

Pistorius, 27, sat on the bench Friday behind his lawyer, the same place he has spent every one of the 41 days of proceedings. He wore glasses, mostly looking straight ahead.

Chief defense lawyer Barry Roux argued the killing was an accident and said Pistorius' disability had made him feel particularly vulnerable and anxious about crime over the years, comparing him to a victim of abuse who kills an abuser after a long period of suffering. Pistorius' lower legs were amputated when he was a baby, and Roux said that the athlete's long-held fear of being attacked because of the disability played a central role in the shooting on Feb. 14, 2013.

At one point Friday, Roux slammed his hand onto a desk in the courtroom to mimic a sudden sound he says the disabled athlete heard during the fatal night, startling him and causing him to fire four shots.

"You're anxious. You're trained as an athlete to react. ... He stands now with his finger on the trigger ready to fire," Roux said, describing the highly fearful mindset he says Pistorius was in when he killed Steenkamp.

"He stands there and ..." Roux continued before suddenly hitting the wood surface in front of him to create a loud thump, arguing Pistorius fired on "reflex."

Pistorius pleaded not guilty to the main murder charge and also three separate firearms charges. Roux, however, conceded that his client was guilty in one of those firearms charges, of negligently firing a gun in a public place in an incident at a restaurant weeks before Steenkamp's killing. Prosecutors have used the firearms charges to paint Pistorius as a hothead who was obsessed with guns, not the vulnerable figure his defense puts forward.

Referring to some of the defense's arguments already submitted to the court in a 243-page document, Roux said there were contradictions in testimony by some neighbors who said they heard a woman screaming on the night that Pistorius shot Steenkamp, suggesting a fight. Roux said high-pitched screams came from Pistorius as he called for help after the shooting and that the athlete's timeline of the sequence of events, including telephone calls, on the night of the shooting matched the testimony of key trial witnesses.

Roux also alleged that items in Pistorius' bedroom, near the bathroom where he killed Steenkamp, may have been moved around by investigating officers, repeating the defense's allegation that police tampered with evidence, albeit unintentionally.

"There was no respect for the scene," Roux said of the police investigation.

The positioning of bedroom items, including a fan, a bedcover and a pair of Steenkamp's jeans, is important because, in police photographs, they were not in the places where Pistorius said they were before the shooting. Prosecutors have used this to argue Pistorius is lying to hide a murder.