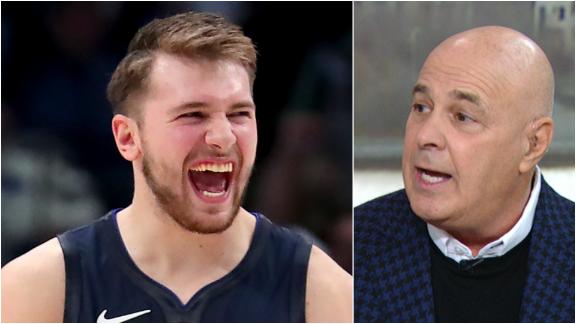 While the Dallas Mavericks suddenly are uncertain about Kristaps Porzingis' right knee soreness, the Brooklyn Nets are trying to figure out how to escape a stretch of spotty performances.

Porzingis could be out of the lineup again Thursday night when the Mavericks open a season-high six-game homestand against the Nets, who are on a three-game losing streak.

Porzingis is 31 games into his recovery from a torn left ACL sustained on a dunk on Feb. 6, 2018 while playing for the New York Knicks. He's averaging 17.3 points and 9.4 rebounds while forming a dynamic pairing with flashy second-year guard Luka Doncic.

Porzingis missed his second game of the season Tuesday when the Mavericks lost 106-101 in Oklahoma City. He was not on two pregame injury reports but wound up sitting for the first time since a 138-122 win at Memphis on Nov. 9 after feeling some pain in pregame warmups.

"Pain in certain areas and it just didn't feel right," Porzingis said. "I explained how it felt and kept trying to warm up and it was not right, so that was that."

Without Porzingis, the Mavericks squandered a seven-point lead in the final 2:42 and were unable to stop Chris Paul down the stretch.

"We've got a deep roster," Dallas coach Rick Carlisle said. "We're very capable of having guys step up and step forward. We're not going to be an excuse team. We're just not going to go there. We've just got to execute better at both ends."

Porzingis is not the only Mavericks player dealing with injuries.

Doncic scored 35 points after sustaining a sprained left wrist and back contusion in Sunday's loss at the Los Angeles Lakers. Tim Hardaway Jr. also sat out with a strained left hamstring suffered Sunday and could be out again Thursday after starting the previous 18 games.

Regardless of whether Porzingis plays, the Nets are hoping to stop their second three-game losing streak of the season. Brooklyn is averaging 105.4 points, shooting 40.8 percent and hitting 28.9 percent of its 3-pointers in a 3-6 slump since beating Denver on Dec. 8.

The Nets are 12-9 without Kyrie Irving (right shoulder impingement), who last played Nov. 14 in Denver and is expected to miss Thursday's game. They could be getting back Caris LeVert (sprained right thumb) soon, as he practiced Wednesday.

Like the Mavericks, the Nets coughed up a late lead in their last game. The Nets blew a five-point lead in the final 2:06 Monday and then got outscored 19-12 in overtime during a 122-115 loss at Minnesota.

"It was just an unacceptable performance by us," Nets coach Kenny Atkinson said. "We were lucky to get to overtime, quite honestly. Even at halftime, I felt like we were just not playing at a high level. We're not playing up to Nets standards. Hard to figure out why. I didn't think it was an overtime game. I thought they outplayed us."

Spencer Dinwiddie scored 36 points against the Timberwolves and is averaging 31.5 points in his last six games. Dinwiddie and his teammates also are shrugging off notions of fatigue as the Nets are in danger of falling below .500 for the first time since Nov. 22.

"I don't think it's fatigue at all," Brooklyn forward Joe Harris said. "Everybody gets fatigued. It's a level of focus."