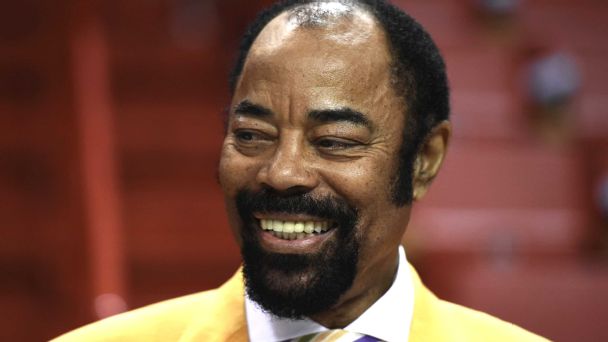 The younger New York Knicks fans out there probably know Walt "Clyde" Frazier for the catch phrases he uses while calling games: "dishing and swishing," "posting and toasting," "wheeling and dealing" and "hooping and swooping." But Knicks fans of a certain age remember Frazier in a different light -- a Hall of Fame point guard who helped lead New York to two NBA titles, one of the best two-way players of his time and one of the strongest perimeter defenders in NBA history.

Frazier's NBA debut was 50 years ago to the day on Saturday. He started that game against the Detroit Pistons after missing the first five games of the regular season with an ankle injury.

Below, Frazier, now 72 and in his 30th season as a broadcaster on MSG Networks, takes a look back at that game and how different life was in the NBA in the late 1960s.

Q: What do you remember about that game?

A: I started that game, I didn't even know [I was starting]. I went about 1-for-8 in 32 minutes but the [newspaper reporter] said I played a good all-around game: "The other guys stunk. But the guy Frazier, the first-round draft choice, looked pretty good." I was definitely nervous. That's why I didn't shoot well, I was so nervous. But I was confident in my defense. Everybody thought I was a defensive player because I didn't shoot the ball that much. But I wasn't confident in shooting yet.

Q: What do you remember about the night before or the day of the game?

A: Well I lived at the New Yorker [Hotel] right here [one block north from the current Madison Square Garden site]. The Knicks would put us up. We only had to pay incidentals to live at the New Yorker. But I lived in a room smaller than [the approximately 16-foot-by-10 foot room the interview was conducted in]. [Veteran Walt] Bellamy had a suite, so it was based on your status (laughing). The air conditioning was rattling [in my room]. The next season I had a better room (laughs). So when you come out, the lobby is full of people because they know the players stay there. So the people are hounding you for autographs and everything. All in the lobby. Very exciting, man.

Q: When did you get to the arena?

A: I think we had to get there an hour before the game. A whole different thing then. No shootarounds.

Q: Do you remember anything about the opening minutes?

A: I'm sure I was so nervous. I hadn't even played because in the preseason I got injured. I didn't play the first five games [because of a sprained ankle] and now they start me. It was my right ankle, so I had to drive a car with my left foot (laughs). It was a hassle.

Q: What was it like sitting out due to injury?

A: The first five games I didn't sit on the bench, I was in the crowd. And I saw how hostile the fans were. I was like, "Oh my goodness." The booing, they were yelling at people (laughs). The Knicks could beat anyone for 46 minutes, then the last two minutes they blow the game and the crowd just went crazy. They were throwing paper. At the old Garden, they could throw stuff out on the court. What helped me was that they were waiting for [Bill] Bradley. There wasn't a lot of pressure on me. Bradley was a Rhodes Scholar. He was coming in January. So everybody was waiting for Bill. So I was flying under the radar. Nobody was really focusing that much on me.

Q: Did those rookie nerves in the first game last throughout the season? Were they gone after a few games?

A: Yeah I had those rookie nerves because I didn't really like the team. The guys were selfish. Nobody would pass the ball to each other, nobody would play defense. They wouldn't get back. Like, if I took the ball out of bounds, I wasn't seeing it again. So I knew, hey man, I'm going to play defense and make assists and that was my role early on, until [Red] Holzman took over. Because he came in, saying we're playing defense. So we started to pick up from end line to end line. And obviously that's my forte, so I started to see more time. Phil Jackson started to see more time. When the Knicks got behind, we'd come in pressing and trapping, trying to get back in the game.

Q: What was it like being on road trips with Phil Jackson that season?

A: Phil and I would go out. We'd go to Chicago, we'd go to L.A.; we'd go out sightseeing and come back just in time to hop on the bus and go to the game because we weren't seeing much time. So we were all over the place [on the road].

Q: So you had a chance to see some of the road cities?

A: It was because of [Jackson]. I could sleep 24 hours a day, so if it wasn't for him, I wouldn't see anything. We were roommates so he's like, come on Clyde, let's go. Let's go do some sightseeing.

Q: What stands out after all these years?

A: My teammates, teamwork. Starting with Holzman, demanding that you play defense and play as a team or you're not going to play if you're not a team player. So he set the standard once he became the coach, and you look at the record -- once he came in that's when we started thriving. I'll never forget the first time he was the coach, Bradley was late. Bradley had just come in from England, and Holzman fined him. Everybody stood up straight in their chair, like, 'Damn, he fined Bill Bradley?' So he played no favorites man. ... There was only one set of rules, for Frazier, Reed to the last guy on the bench. He was consistent. And if you work hard in practice, you get in the game. So everybody gave 100 percent out of respect [for Holzman].

Q: What has changed most in the NBA since those days?

A: The three ball, man. The three ball has changed the game. When we played it was more pick-and-roll, half court. The Celtics were the only team that ran all the time. Everyone else was more [into] exploiting mismatches. You get a guy, you go post him on the low post. Pick-and-rolls, back-door plays. The basics of the game. The physicality -- you could hand check. Very physical defense.

Q: It seems like the beginning of Knicks rookie Frank Ntilikina's career is similar in some ways to yours. He sat out most of preseason with a knee injury and missed two games recently with an ankle injury before making his home debut on Friday. What have you thought of him? (Question asked before Ntilikina's MSG debut against Brooklyn)

A: He's composed, man. He shows a lot of poise out there. But like me, I could tell that he needs to work on his shot. But he's comfortable with the defensive aspect of the game and rebounding. But his shooting, I can tell. So he's probably nervous but I had three years on him, he's 19. And I'm obviously from the [United] States. And he's coming over from France to this situation. So it's obviously going to be more difficult for him. I think his teammates are going to be the key as far as being positive role models for him. I had Emmette Bryant, Freddie Crawford, Dick Barnett. All these guys would kind of pull me under their wing and tell me what to do, where to go off the court, taking vitamins. So all of that was very invaluable to me.

Q: What do you think when someone tells you it's been 50 years since your debut?