QB Aaron Rodgers: Packers' energy level 'wasn't where it needed to be' 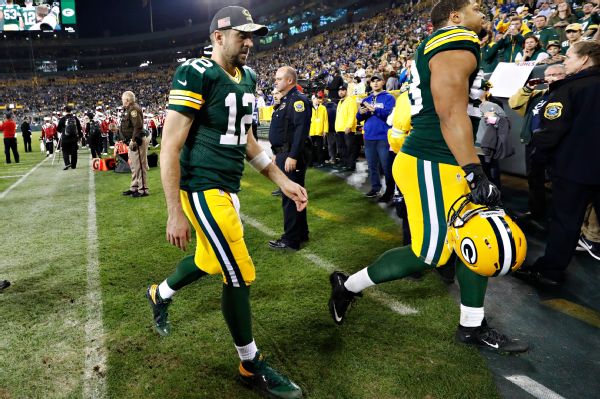 GREEN BAY, Wis. -- Aaron Rodgers didn't like the vibe from his team on Sunday, and the Green Bay Packers quarterback delivered that message loud and clear after its third loss in the past four games.

Rodgers said his team had "uncharacteristically low energy for whatever reason" in the 31-26 loss to the Indianapolis Colts at Lambeau Field on a day when a win would have pulled the Packers into a first-place tie with the Minnesota Vikings in the NFC North. Instead, they're 4-4 at the midway point of the season.

Things didn't start well for the Packers, who allowed a 99-yard kickoff return for a touchdown on the first play, but that shouldn't have been the downer that it was, according to Rodgers.

"I mean, that didn't help, I'm sure, but c'mon -- we've got to be mentally tougher than that," Rodgers said. "That's just unacceptable."

Just as troubling to Rodgers was that it didn't get better -- even after his 26-yard touchdown pass to Jordy Nelson that pulled the Packers to within 14-10 at the end of the first quarter.

"I don't understand it," Rodgers said. "I mean, this is what we get paid to do, is to bring it every week, and I hope the guys would say I bring it every week. I mean, I love this game and I bring energy. I'm not a rah-rah guy, but I'm a focused, enthusiastic player, and I don't know what the lack of juice was. You kind of felt it over the entire sideline. We didn't have the same kind of enthusiasm and encouragement that we had the previous two weeks. So we've got to look deep in the mirror there, because that's just not acceptable."

Rodgers also said the Packers have to be "tougher."

"That's the mark of a team," he said. "We talk about that all the time at my locker. How you deal with adversity says a lot about the kind of players you've got and the kind of team we've got. We've got to respond a little bit better."

Rodgers even referenced the squirrel that ran onto the field and caused the game to be stopped briefly in the third quarter as one of the few things that got the crowd excited until Green Bay mounted a late-game comeback from 18 points behind.

"We have to respond better, like we did to close out the game, [and] get the crowd involved more than just the squirrel on the field," Rodgers said.

The Packers' performance came after what coach Mike McCarthy described as "our best week of preparation."

Rodgers didn't promise any players-only meetings or intervention to fix the problem, but he believes the message will get across.

"Everybody's going to talk about it; you guys are going to write about it," Rodgers said. "Hopefully, that wakes people up enough that that's important. I mean, we feel it. It's not something that's some mystery. You feel the energy and excitement and the focus, it just wasn't where it needed to be, and that's on everybody -- myself included. We've got to find a way to get guys dialed in."

Rodgers not happy with lack of energy from Packers
Packers quarterback Aaron Rodgers discusses what he considers to be a lack of energy from his team in a loss to the Colts.
Related topics:
sportsespnsquirrelnflgreen bay packersaaron rodgerslambeau fieldmike mccarthypackenergy
Copyright © 2021 ESPN Internet Ventures. All rights reserved.
More Videos
From CNN Newsource affiliates
TOP STORIES