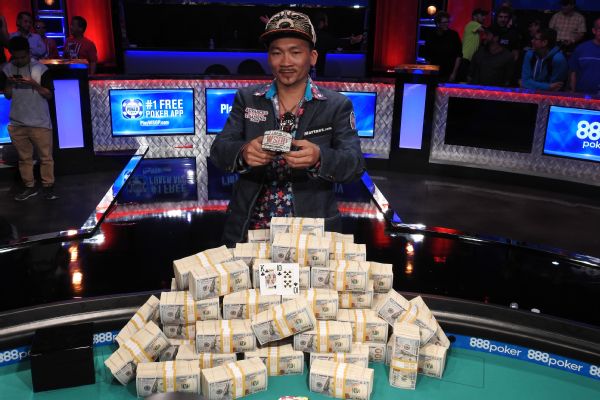 He defeated Gordon Vayo in a heads-up battle that lasted 182 hands and well over seven hours to win the WSOP bracelet in his first time playing the WSOP main event.

After failing to put Vayo away in three all-in showdowns, the fourth all-in between the pair led to Nguyen's victory. On the final hand, Nguyen raised to 8.5 million chips and Vayo re-raised all-in for 53 million. Nguyen called with Kc-Tc and had Vayo's Js-Ts in bad shape, but Vayo improved from three winning cards to eight on a Kd-9c-7d flop. The 2s turn and 3h river triggered cannons of confetti to fire off in the Penn & Teller Theater inside the Rio All Suite Hotel & Casino as the newest world champion of poker was crowned.

Even as one of the least experienced players at this final table, Nguyen dominated the action throughout the three days of this final table and didn't allow Vayo much room to maneuver in the late stages of the tournament.

"I actually never played much heads-up, but I was very aggressive," Nguyen said after his victory. "[Whether it was] five-handed or two-handed, I was still [just as] aggressive."

Nguyen was able to stay loose and relaxed despite the high-pressure environment in which he was playing, in large part thanks to focusing on his process over the results.

Nguyen, 39, was the chip leader to end both the first and second day of final-table play but quickly fell out of the top spot. He doubled up short stack Cliff Josephy on the first hand of play Tuesday, and then Vayo won most of those chips in a pot worth more than 200 million (out of 336.6 million total chips in play) with three-of-a-kind threes against three-of-a-kind deuces.

Josephy doubled his stack through Nguyen twice, bringing himself briefly back into contention only to dump those chips back shortly before his demise.

Despite being the chip leader to begin the final table Sunday, Josephy was unable to make much of a positive move until the start of Day 3. While he was ultimately eliminated in third place, it came after a chaotic start to the final table; in 16 hands of three-handed play, Josephy was involved in five all-in pots, including the double-up on the very first hand and set-over-set hand against Vayo. Josephy also lost the last of his chips to Vayo, when his Qd-3d made a pair of threes and couldn't beat Vayo's pair of kings with Kh-6d. For his third-place finish, Josephy received $3,453,035, eclipsing his next-best tournament payout by more than seven times.

"They gave me a good sweat there," Josephy said. "I was happy to get cards -- I was card-dead for two days, and I wasn't happy about that. I played the best that I could, finally picked up some hands early, got excited and then they just beat me right down."

Vayo and Nguyen traded the lead several times early on in heads-up play, but the tournament turned well into Nguyen's favor with a single river card. Nguyen took aggressive actions on the flop and turn despite holding just a draw with Qc-5c, against Vayo's Ad-9h on a board of Ac-Ts-9c-Ks, but the Kc on a river made Nguyen's flush and he immediately pushed his stack all-in -- the first such bet of heads-up play. After more than six minutes, Vayo ultimately folded, but that pot gave Nguyen a lead of more than 2-to-1.

During the next 20 minutes Vayo's stack dwindled further until he found himself all-in for the second time Thursday with As-Jd against Kh-9h. Neither player improved his hand, pulling Vayo back to within a 2-to-1 disadvantage. Although Vayo hovered around this mark for a considerable stretch, he continuously found himself worn down by Nguyen's aggressive style.

On one particular hand, where Vayo flopped the top pair on a nine-high board, Nguyen eventually put Vayo all-in on the river. Had he called, he would have taken his first lead of the final table; Vayo instead elected to fold, and that was his only regret in how he played.

"I read into something I shouldn't have," Vayo said. "I made a little deviation from my strategy, and I didn't feel strong enough. I should have called."

There was a brief moment of recovery for Vayo, who got lucky to hit a running turn and river to make a flush when both players flopped a pair of queens, but he'd never get closer than a 50-million-chip gap.

After grinding down Vayo's stack yet again, a third all-in pot led to one final double-up for the eventual runner-up -- but Nguyen would finally seal the victory on his fourth try.

It was clear that Nguyen executed his plan to near perfection, as he had all of his opponents scrambling for the majority of the final table. "It's hard to pinpoint his strategy," Vayo said. "He just kind of plays every hand uniquely; he doesn't necessarily have a constructed strategy. Not that that's a negative, but most people aren't able to adapt to every hand and make so many correct assumptions and correct plays over and over again, and he was able to do that."

Qui Nguyen is the 47th WSOP main event champion and just the second Vietnamese-born winner; the first was Scotty Nguyen, who won the 1998 WSOP main event for $1 million. 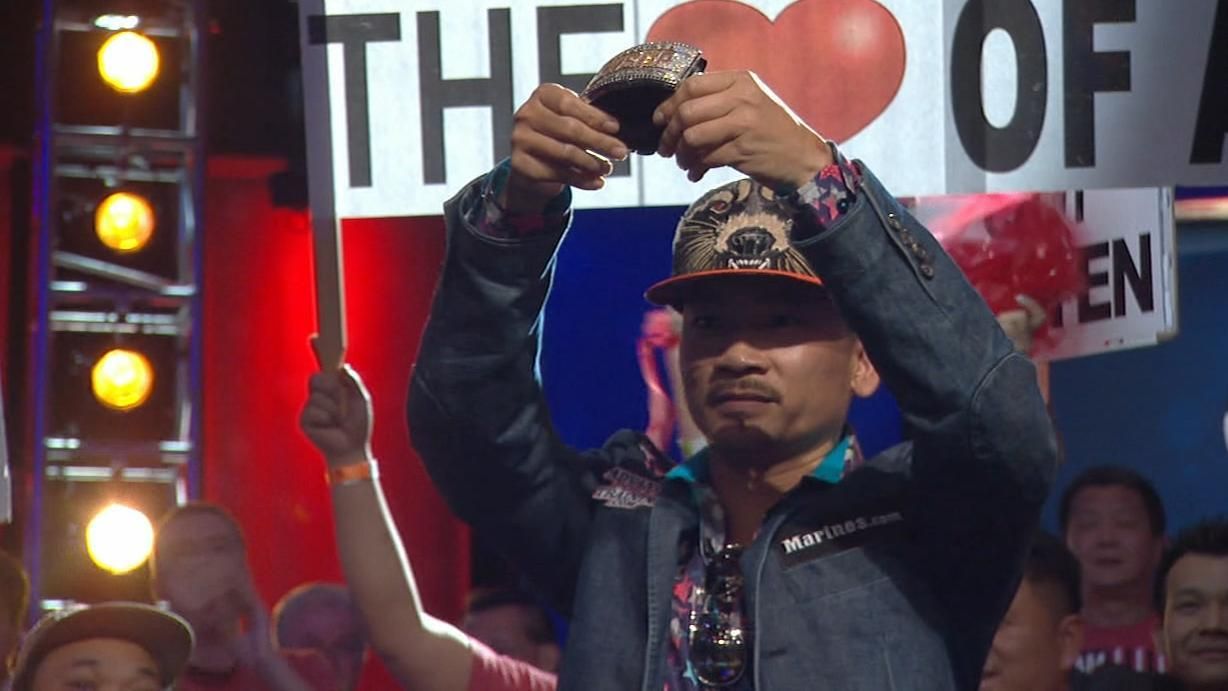