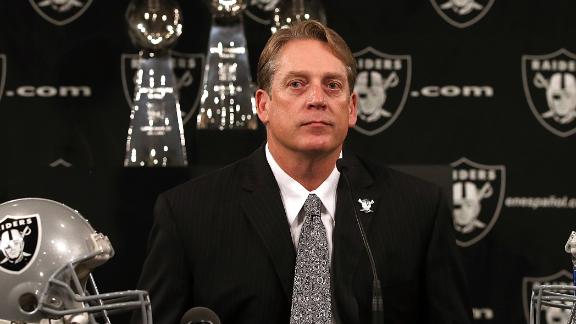 The 51-year-old Del Rio has returned to his roots and couldn't be happier about it.

Del Rio was introduced as the Raiders' new head coach Friday after spending the past three seasons as the defensive coordinator in Denver. He reflected on his time in the Bay Area but made it clear he's not just coming home for the party.

"I've been a Raider fan all my life," Del Rio said. "That's not the main reason I came back. I was blessed with this opportunity and agreed to take this job because of a lot of factors. It starts with knowing there is good leadership in place that I believe I can work with, that we can build this team."

Del Rio was one of about a dozen candidates interviewed for the coaching vacancy by team owner Mark Davis and general manager Reggie McKenzie. That list was quickly whittled down to two finalists -- Del Rio and former interim coach Tony Sparano -- before the decision was made to go with Del Rio.

Davis, who took a backseat in the hiring process three years ago shortly after the death of his father, Al Davis, was much more involved this time around. He flew to Denver and held a one-on-one meeting with Del Rio during the wild-card week of the playoffs when theBroncoshad a bye.

There was a follow-up interview after Denver was eliminated from the playoffs last week, and that was all the convincing Davis needed.

"When it came down to it I had one person I felt should be the head coach of the Oakland Raiders," Davis said. "After we had the interview with Jack for the second time, Reggie and I went back and talked for about an hour. We fully agreed on it. It was simple. I believe he's right for the Raiders right now. I think he is the guy, and he understands us."

Del Rio inherits one of the NFL's least successful franchises over the past decade.

The Raiders are just 56-136 over the previous 12 seasons, have won five games or fewer in 10 of them and haven't been to the playoffs since their Super Bowl run in 2002.

Oakland finished 3-13 in 2014 after an 0-10 start and owns the fourth overall pick in the upcoming NFL draft.

"This is an organization that has been an excellent organization for a number of years, and it's fallen on some hard times recently, but the foundation is in place for us to be great again," Del Rio said. "It's up to us. I want to empower the players in the locker room to be accountable to be able to step forward, to take the team, to take the torch and to build this thing great again. We've got a lot of work to do and I'm excited to be here and excited to get started."

Del Rio, who signed a four-year contract with Oakland, smiled as he talked about sitting in the stands as a youth watching Raiders games at the Coliseum with his father. His parents bought season tickets when the team relocated from Los Angeles in 1995, and continue to attend games every year.

Flanked at the interview table by McKenzie and Davis, Del Rio beamed when talking about his time growing up in the Bay Area and said he's already heard from several friends still living in the region.

The celebration won't last long, however.

The Falcons allowed Tice out of his contract Friday, paving the way for him to join Del Rio's staff. Tice told ESPN.com's Vaughn McClure he received clearance from the Falcons at 4:15 p.m. ET upon boarding a plane with his wife for a weekend getaway. He is expected to travel to Oakland on Sunday, but no contract has been signed with the Raiders yet.

"I can assure you that we have a very strong group of people who are excited about coming here and joining this organization," Del Rio said. "We're going to work through that list and take care of business as we can."

Specific details of Del Rio's contract have not been released but he indicated that Davis has given him the financial support to fill out his coaching staff. The Raiders have historically paid lower than average salaries for assistant coaches but are willing to open the checkbook now.

"It was important to understand that there would be structure in place that would allow financial commitment, which would allow us to get some of the top talent," Del Rio said. "Mark has indicated that is the case."

Del Rio previously spent nine seasons as Jacksonville's head coach from 2003 to '11, guiding the Jaguars to a pair of playoff appearances in '05 and '07.

McKenzie reached out to Del Rio in 2012 when the Raiders had a coaching vacancy. He ultimately settled on Dennis Allen, who lasted less than three seasons before being fired shortly after the team returned from playing in London in Week 4 this season.

Del Rio went on to coach the defense in Denver and helped the Broncos to three consecutive AFC West titles.

The time off from being a head coach definitely helped, Del Rio said.

"After nine years I needed a little rejuvenation," Del Rio said. "I was able to kind of collect myself, go through some of the things that went well, that didn't go well. Just basically grow from the experience and hopefully be able to utilize that knowledge and apply it now with this great opportunity."

Raiders Introduce Jack Del Rio
Jack Del Rio discusses what he will bring to the Raiders as their new head coach.