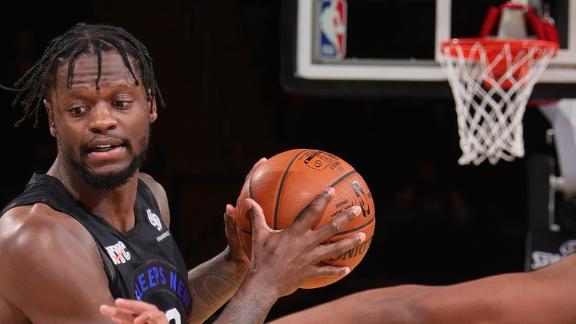 NEW YORK -- - The New York Knicks made sure their loss to Phoenix was just a temporary bump in the road.

Julius Randle scored 34 points and the Knicks beat the Chicago Bulls 113-94 on Wednesday night for their 10th win in 11 games.


RJ Barrett added 22 points as New York bounced back from its loss Monday that snapped a nine-game winning streak. Immanuel Quickley and Reggie Bullock each scored 13 points as the Knicks regained sole possession of fourth place in the Eastern Conference.

"We just enjoy playing with each other," Quickley said. "Everything is clicking. We just want to continue to take the right steps and just try and make a playoff push."

Nikola Vucevic had 26 points and 18 rebounds for Chicago. Lauri Markkanen added 14 points, while Colby White and Garrett Temple each had 12.

The Knicks outscored the Bulls 37-19 in the fourth quarter after leading just 76-75 through three.

"I'm excited about how we compete and how we can still improve," Randle said. We can still get better."

A 9-0 run gave the Bulls their first lead of the game at 59-58 on Tomas Satoransky's layup with 7:20 left in the third quarter. The Knicks followed with their own 9-0 run and Randle's short jumper for the final basket of the period put them back in the lead and ignited an 11-0 run that stretched into the final quarter.

"We're still striving to be a 48-minute team," Knicks coach Tom Thibodeau said. "Leads dissipate quickly in this league. You can't let your guard down."


The Knicks boosted their lead to 91-77 on Quickley's floater with 7:39 remaining. After Chicago pulled within nine, the Knicks went on a 20-9 streak punctuated by Randle's 3-pointer with just over a minute left as New York took its biggest lead at 113-93.

Thaddeus Young added 10 points for the Bulls, who had won four of their previous six games.

"A lot of our guys are getting exposed to things that I think will help them," Bulls coach Billy Donovan said. "No matter how long it takes us to grow and develop, we'll see."

Bulls: Leading scorer Zach LaVine (27.5 ppg) missed his eighth consecutive game due to health and safety protocols. ... No one has played in all 62 games for Chicago this season, but Patrick Williams has started all but one.

Knicks: Barrett is the only Knick to play in all 63 games this season. He has started each one. ... Thibodeau was the Bulls' coach for five seasons (2010-15) and is the third-winningest coach in franchise history (255).

Exactly 63 years earlier, on April 28, 1958, Red Holzman was named Knicks assistant coach. He took over as head coach midway through the 1967-68 season and proceeded to lead the franchise to a record 613 victories and two NBA titles during his Hall of Fame career.


HEADING IN OPPOSITE DIRECTIONS

The Knicks are in position to make the playoffs for the first time since the 2012-13 season, while the Bulls are headed toward a fourth straight year without a spot in the postseason.

The Bulls had scored at least 100 points in eight straight games and in 17 of their previous 18 before falling short on Wednesday. The Knicks have hit the century mark in their last 11 games.