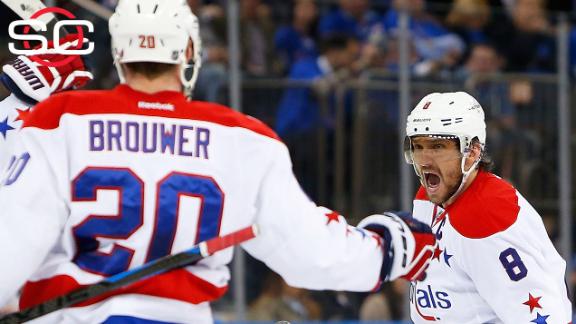 NEW YORK -- Rangers coach Alain Vigneault dropped the gloves Friday afternoon, making it pretty clear how he felt on the officiating in the 2015 Stanley Cup playoffs and hinting that his team would adjust accordingly.

"We know what the standards are," Vigneault continued. "Play up to those standards."

The Rangers were noticeably upset Thursday night with Backstrom's hit on Boyle in Game 1, a hard check along the boards that Boyle told reporters left him "dazed and confused," though no penalty was called on the play. The hit set up the game-winning goal sequence which was capped by Joel Ward's buzzer-beater that gave Washington a 2-1 win and a 1-0 series lead.

The NHL Department of Player Safety does not plan on dishing out any supplementary discipline for Backstrom, a source confirmed to ESPN.com.

Capitals coach Barry Trotz said he agreed with the no-call on the ice and saw nothing wrong with the hit. In fact, he referenced the crowd along the glass where the hit occurred and remarked that those fans who had a front-row view of the play hardly seemed bothered by the contact.

Game 2 between the Rangers and the Caps is Saturday afternoon at Madison Square Garden.