Rangers' Shesterkin shuts out Sharks 3-0 in return to lineup 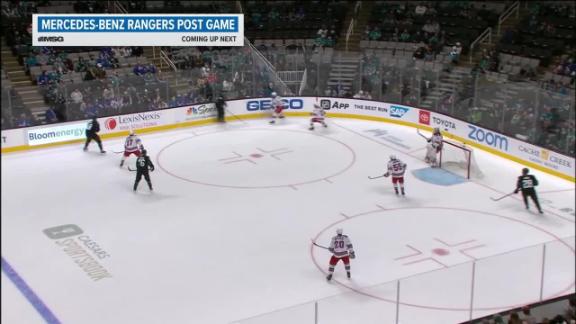 SAN JOSE, Calif. -- - Igor Shesterkin made 37 saves in his return from COVID-19 protocol, Braden Schneider scored in his NHL debut and the New York Rangers beat the San Jose Sharks 3-0 on Thursday night.

"A lot of the credit has to go to Shesterkin," acting Rangers coach Kris Knoblauch said. "There were a lot of Grade A scoring chances and he came up with some big saves."


Chris Kreider got his first career short-handed goal and an empty-netter to reach 200 goals as the Rangers followed up a 1-0 victory over the Sharks at Madison Square Garden on Dec. 3 with another shutout less than six weeks later.

Adin Hill stopped 27 shots for the Sharks, who failed in their attempt to match a season-high four-game winning streak. San Jose has lost seven straight against the Rangers.

"We've got to score to win," coach Bob Boughner said. "Tonight I thought we played a good game. I didn't think we shot ourselves in the foot or got dominated. We fought hard and the difference I think was giving up a shorty. ... We battled hard, we just couldn't find any offense. It wasn't from a lack of trying."

Shesterkin was activated from the COVID-19 list earlier in the day and was sharp in his first action since Jan. 2, when he had a 38-save shutout against Tampa Bay.

He stopped Andrew Cogliano on a breakaway in the second and then made another big stop late in the period on a deflection from Tomas Hertl.

"In the first period, I was a little nervous," Shesterkin said. "But when I stopped a couple of shots the nerves go out."

Shesterkin had 19 saves in the first meeting with the Sharks before leaving early in the third period with a lower-body injury.

"Shesterkin is really, really good," Sharks forward Nick Bonino said. "Shut us out twice this year. We had some Grade A looks but he's never caught out of position."

Kreider gave the Rangers the lead in the first period when he converted just seconds after Ryan Strome went to the penalty box for cross-checking.


Mika Zibanejad won the ensuing faceoff, sparking a quick rush. Zibanejad then fed Kreider, who scored the first short-handed goal of his 10-year career. Kreider had been used sparingly killing penalties during his career until taking on a regular role on the unit this season.

"I wanted that one for a while," Kreider said. "Almost screwed it up."

It was the sixth short-handed goal allowed by San Jose this season, tied for most in the NHL.

The 20-year-old Schneider, drafted 19th overall in 2020 after New York traded up to get him, added some insurance early in the third when Strome set him up in the high slot.

"I was in the right place at the right time and I couldn't have drawn it up any better myself," Schneider said.

Schneider became the seventh Rangers defenseman to score a goal in his NHL debut and first since Thomas Pock against Pittsburgh on March 23, 2004.

Rangers defenseman Jacob Trouba had a couple of run-ins with Sharks in the second period. First, he and Timo Meier took turns taking shots at each other before getting sent off for coincidental minors.

Then, soon after Trouba got out of the penalty box, he got into a fight with Jeffrey Viel and went right back in for five more minutes.

The Rangers announced before the game that forward Alexis Lafrenire entered COVID-19 protocol and Lauri Pajuniemi was added to the roster.

The Sharks are also down a forward after Alexander Barabanov tested positive for COVID-19 and was placed in protocol, but San Jose get another one back.

Rudolfs Balcers, who had missed the last six weeks with a lower-body injury, returned to the lineup for the first time since getting hurt in New York against the Rangers on Dec. 3.

Rangers: Visit the Philadelphia Flyers in the finale of a five-game road trip Saturday night.