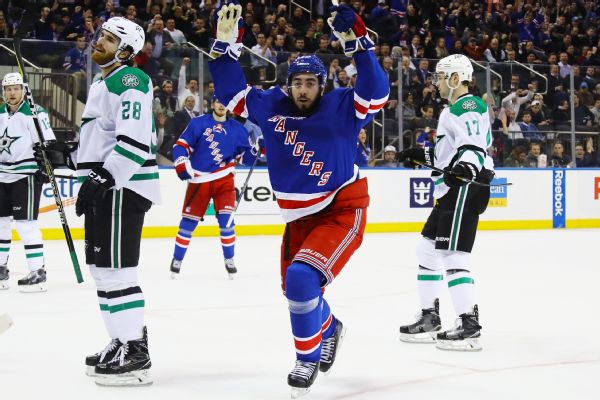 Mika Zibanejad knew from the moment the New York Rangers traded Derek Stepan that his role would be more substantial.

Now he has the contract to match.

The Rangers avoided arbitration Tuesday and signed Zibanejad to a $26.75 million, five-year deal that carries a salary-cap hit of $5.35 million through 2021-22. With Stepan gone, the 24-year-old Swede goes into the season as New York's new No. 1 center.

"Seeing Derek being traded was a little bit of an alert to me that I might get a chance to play a bigger role and as a player you always want more responsibility," Zibanejad said on a conference call. "It's something I'm working really hard to making sure I'm taking advantage of the chance I'm getting."

General manager Jeff Gorton and Zibanejad's representatives negotiated up until the final few minutes before his arbitration hearing was set to begin in Toronto. Zibanejad said he was super happy not to have to go through the hearing and wait for a ruling, instead coming out of the room with a long-term deal.

Zibanejad had 14 goals and 23 assists for 37 points in 56 games last season, his first with New York. The Rangers acquired Zibanejad from the Ottawa Senators for Derick Brassard a year ago.

Trading Stepan and his $6.5 million cap hit to Arizona freed up the space needed to sign defenseman Kevin Shattenkirk, re-sign Brendan Smith and give Zibanejad a raise from his previous salary of $2.63 million. But now he'll be counted on along with Kevin Hayes to play more minutes down the middle and produce like he did in his final two seasons in Ottawa.

"You always want to improve, you always want to evolve," he said. "There's always been moments where you feel like you can take your game to the next level, and that's what I'm working on during the summer, trying to do all the things I can do to prepare myself for this opportunity.