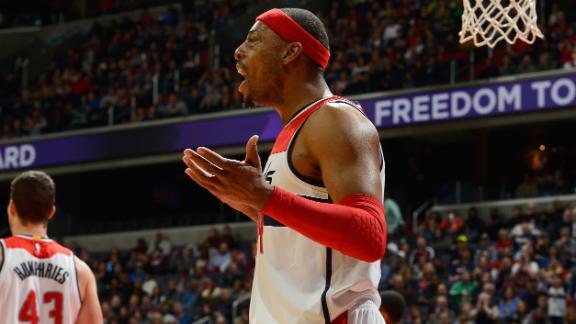 ESPN
By Brian Windhorst
TORONTO -- Masai Ujiri did it again.


Last year the Toronto Raptors general manager stepped in front of several thousand fans outside Air Canada Centre before the first game of the playoffs and declared "F--- Brooklyn" before his team took on the Nets.

Saturday he did it again, responding to Washington Wizards veteran Paul Pierce by standing in the so-called "Jurassic Park" outdoor viewing party in Maple Leaf Square.


"I don't give a s--- about 'it'," Uriji screamed into a microphone before walking off stage as thousands decked in Raptors gear roared.


Earlier this week in an interview with ESPN, Pierce criticized the Raptors by saying they didn't have "it."


"We haven't done particularly well against Toronto, but I don't feel they have the 'it' that makes you worried," Pierce said. "There isn't a team I look at in the Eastern Conference that makes me say, 'They are intimidating; we don't have a chance.'"


Pierce later clarified the comment by saying he meant the Raptors didn't have superstar that could take over a game.


Pierce was loudly booed by the Raptors fans when he was introduced Saturday. He ended up scoring 20 points in the Wizards' 93-86 overtime win.


After his comments last year the NBA fined Ujiri $25,000 for his comments about Brooklyn. Ujiri hinted a possible fine would keep him from firing back at Pierce this year.


"I honestly don't have enough money to respond to him," Ujiri said earlier this week.


"Typical Ujiri," Pierce said after the game. "You heard what he said last year when I was in Brooklyn. I could really care less. I think I can play the psychological war a little better than him."