Real or Not? Surprise star of Yankees' HR streak a stealth MVP candidate 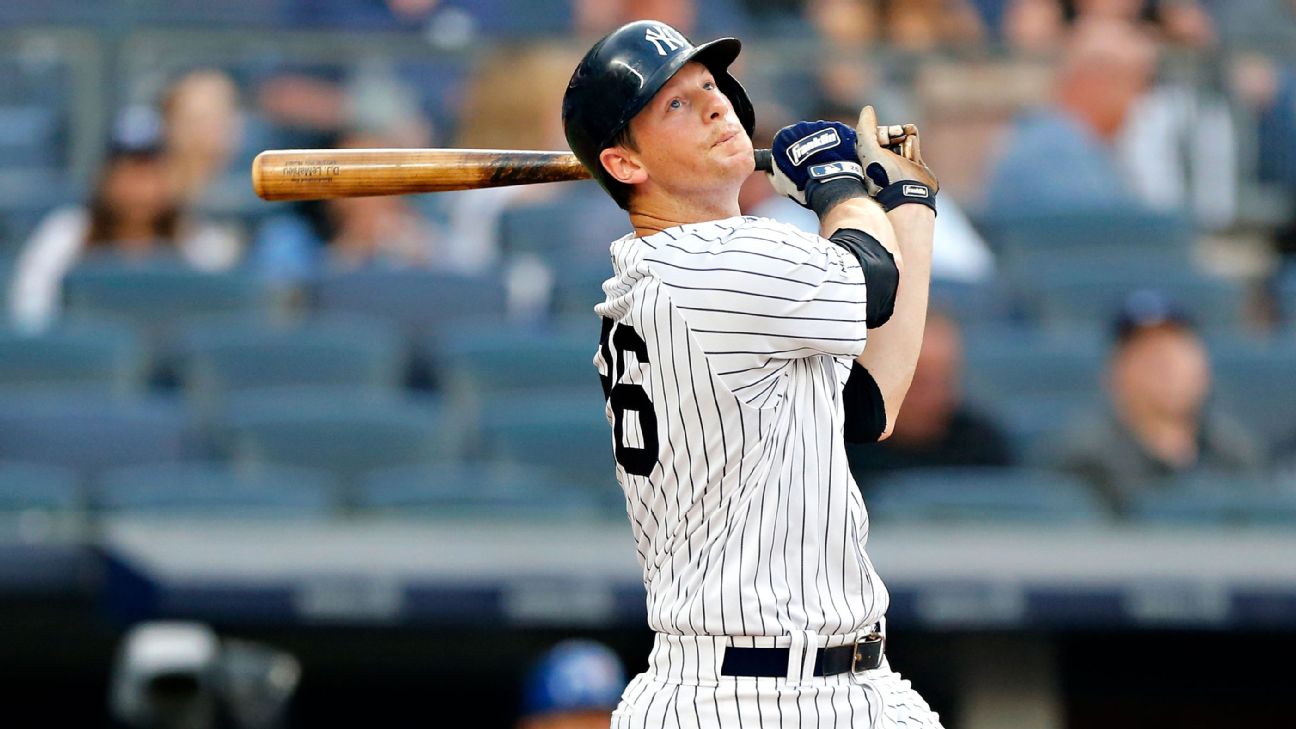 The New York Yankees set the league record with their 28th consecutive game with a home run. Did you really think they were not going to hit a home run Tuesday night? Against Clayton Richard? Playing at home, where pop flies down the line land three rows deep?

It didn't take long to break the old mark. DJ LeMahieu led off the bottom of the first inning and belted the sixth pitch from Richard, a 2-2 fat-and-flat slider, just inside the left-field foul pole for a 392-foot shot. Aaron Judge came up next and he homered, a 406-foot blast to right-center. Gleyber Torres homered in the second inning. And Edwin Encarnacion hit his American League-leading 24th home run in the eighth as the Yankees beat the Toronto Blue Jays 4-3 on those four solo home runs.

So the Yankees knock the fabled 2002Texas Rangersfrom the record book. A few notes from this streak:

The Yankees have hit 51 home runs in the 28 games.

Twenty-five of the home runs have been solo shots. Torres has the lone grand slam.

The next-longest streak during this span is 14 games, by theMinnesota Twins and Seattle Mariners. The Mariners have the second-longest streak at any point this season, beginning the year with 20 consecutive games with a home run.

I'm not sure how intriguing the streak really is. I mean, it's interesting on some level and attests to the depth in the Yankees' lineup. If it wasn't the Yankees who set the record, I'm not sure it would have received this level of attention. After all, it's not exactly a big surprise that the record would be broken this season, given the onslaught of home runs across the league. It's the kind of record that should be broken this season. Kudos to the Yankees, but what interests me more is the guy who hit the record breaker.

LeMahieu is now hitting .333/.382/.512 with 11 home runs, 52 RBIs and 57 runs. He already has equaled the second-highest home run total of his career (he hit 15 last season for a career best). He left Coors Field, but he is hitting 57 points higher than last season -- and he has beat his current .333 average just once in his career, when he hit .348 to win the National League batting title in 2016. His OPS+ of 132 would be the best of his career; the only other season he was even above average was that batting-title campaign.

He has been so good at the plate and then you factor in his versatility -- he has started games at second base, third base and first base -- and all the injuries to players in the lineup, even my colleague Dan Mullen called him a legitimate MVP candidate when writing about the finalists on the All-Star ballot. That might sound like an outrageous statement, but it's actually not that crazy. Check out the American League position leaders in FanGraphs WAR entering Tuesday:

LeMahieu ranks sixth in Baseball-Reference WAR at 3.3. So, yes, suggesting he is a legitimate MVP candidate is a fair statement. Obviously, Trout towers over the field and voters have become less fixated on team record in recent years; but if Trout is ultimately penalized should theLos Angeles Angelsmiss the playoffs, then it could be a free-for-all in the vote.

EvaluatingColorado Rockieshitters has always been a tricky issue. Obviously, Coors Field is a hitter's paradise. But Rockies hitters also suffer what I call an "altitude" penalty when they go on the road. Because balls don't move as much at altitude, they go on the road and suddenly breaking balls become a lot tougher to hit. So, yes, park adjustments penalize Rockies hitters, but when Rockies hitters have left for other teams, the good hitters have maintained their production (see Matt Holliday andDexter Fowler or even old Larry Walker and Andres Galarraga).

Back at sea level now, LeMahieu is hitting .336 on the road, versus .229 last season. He is hitting .331 at Yankee Stadium -- about the same as his .330 career mark at home. He also has learned to launch the ball a little more. He is still an extreme ground ball hitter, but he has gone from an average launch angle of 2.8 degrees in 2017 to 5.7 in 2018 to 6.9 this year. He has always hit the ball hard enough and he is a big guy at 6-foot-4, so a few more fly balls combined with the lively balls means some extra home runs.

MVP candidate? OK, in a league with Mike Trout, that's a tough battle. But LeMahieu certainly has been the Yankees' MVP -- and the best free-agent signing of the offseason.

Another Mets meltdown: Oh boy. The Mets led the Phillies 5-2 in the sixth inning when Mickey Callaway replaced Walker Lockett with Wilmer Font with two on and one out. Font got an out on an RBI groundout, but then gave up an infield single, a two-run homer to Maikel Franco and a pinch-hit homer to Brad Miller. The Mets' bullpen ERA in June is 7.67 and the heat of a thousand suns is suddenly blazing down on Callaway.

After the game, Callaway basically threw his entire organization under the bus:

And this loss happened after these tabloid back covers on Tuesday morning:

A scroll through Mets Twitter included demands for commissioner Rob Manfred to hold a town hall meeting about getting rid of the Wilpons, a columnist referring to Callaway's "complete and regular ineptitude," somebody telling a story about a woman using the Mets' dysfunction as a pickup line on a dating app and the proverbial dumpster fire gifs.

It's hard to believe, but the Mets have actually reached the World Series more recently than 23 other organizations.

Mets and Phillies ... they need their own reality show.

Rangers find potential fix for rotation: The Rangers continue to play well, beating the Tigers 5-3 to improve to 43-36. If the season ended today, it would be a three-way tie for the American League's second wild card between the Rangers, Indians and Red Sox (please let this happen after Game 162). Against the Tigers, desperate for somebody to fill the back end of the rotation, the Rangers turned to reliever Jesse Chavez. He had made four starts as an opener, but this was his first as an official member of the rotation, and he held the Tigers to one unearned run in 6 innings. They even got Joey Gallo back, and he delivered a first-inning RBI hit:

If Chavez continues to pitch well, this rotation suddenly looks pretty decent. Mike Minor and Lance Lynn are All-Star candidates, and Adrian Sampson has pitched well of late (3.28 ERA over his past 46 innings). Like a lot of teams, theRangers could use another starter, and they certainly need better production from Rougned Odor (.177/.253/.350) and Ronald Guzman (.220/.304/.449). I don't know if the Rangers will make a splash at the trade deadline -- after all, they were really just intending to tread water this season before opening their new ballpark in 2020 -- but they're at least making the final season in Globe Life Park interesting.

Royals shock Indians in ninth: The Indians were up 6-3 in the ninth, and Brad Hand came on for the save. Arguably, he had been the best reliever in the majors this season: 22-for-22 in save chances, 1.05 ERA, 50 strikeouts and eight walks and just one home run in 34 innings. Well, his ERA is no longer 1.05, and now he is 22-for-23 in save chances. The Royals improbably scored five runs off Hand without making an out. Hunter Dozier played the hero with this grand slam:

What a win for the Royals. What a crushing defeat for the Indians. Dozier, by the way, is one of the three finalists at third base for the All-Star Game, and while he is unlikely to beat out Alex Bregman, Dozier is hitting .302/.387/.585 and has a chance to make the team (although time missed with the injury will hurt him, and Matt Chapman might win backup honors). Still, Dozier's improvement has been one of the biggest surprises of the season.

Snell struggles again: Blake Snell was my AL Cy Young pick. His stuff was so unhittable last season, I went for the repeat winner, knowing that's a tough feat to achieve. He told me in spring training that he expected an even better season. He was not lacking in confidence. His season has spiraled downward in June, however, and after the Twins knocked him around for 11 hits and seven runs in 3 innings, he fell to 4-7 with a 5.01 ERA -- 11.94 in June, as he has lasted just seven total innings over his past three outings (he got just one out against the Yankees in his previous start).

ESPN's Brad Doolittle was at the game in Minnesota and reports that Snell actually said he had good stuff:

"Everything was working," Snell said. "I felt really good. I can't lie. I really do feel good. Result-wise, yeah, it sucks, but [there were] a bunch of jam shots, [Jonathan] Schoop hits a home run on a good pitch, so you have to tip your cap to that. But not a lot of hard contact. I can't be too hard on myself. I've been hard on myself [before]."

OK, maybe so, but it certainly looked like Snell threw some hangers in this one, like this breaking ball that Mitch Garver hit for a two-run single:

Snell gave up five hits with two strikes against the Twins. Last year, he buried batters in those situations, holding them to a .115 average with a 53.5 percent strikeout rate.

"I think people think I'm crazy if I tell them I feel better right now than I did last year," Snell said. "And I really do. But it's frustrating."

It's not surprise that the Rays have stumbled in June (10-14) as their ace has struggled. They need Snell's results to start matching how he feels.

Bad play of the night: The Cubs had the bases loaded in the second inning with one out and pitcher Adbert Alzolay up to bat. Braves starter Max Fried had walked the bases full, but what appeared to be a safety squeeze turned into a double play when Alzolay missed the bunt, Javier Baez wandered too far off third base and then Willson Contreras got caught trying for third:

How much did that play cost the Cubs? The Braves won 3-2 when Ozzie Albies hit a go-ahead home run off Mike Montgomery in the seventh. 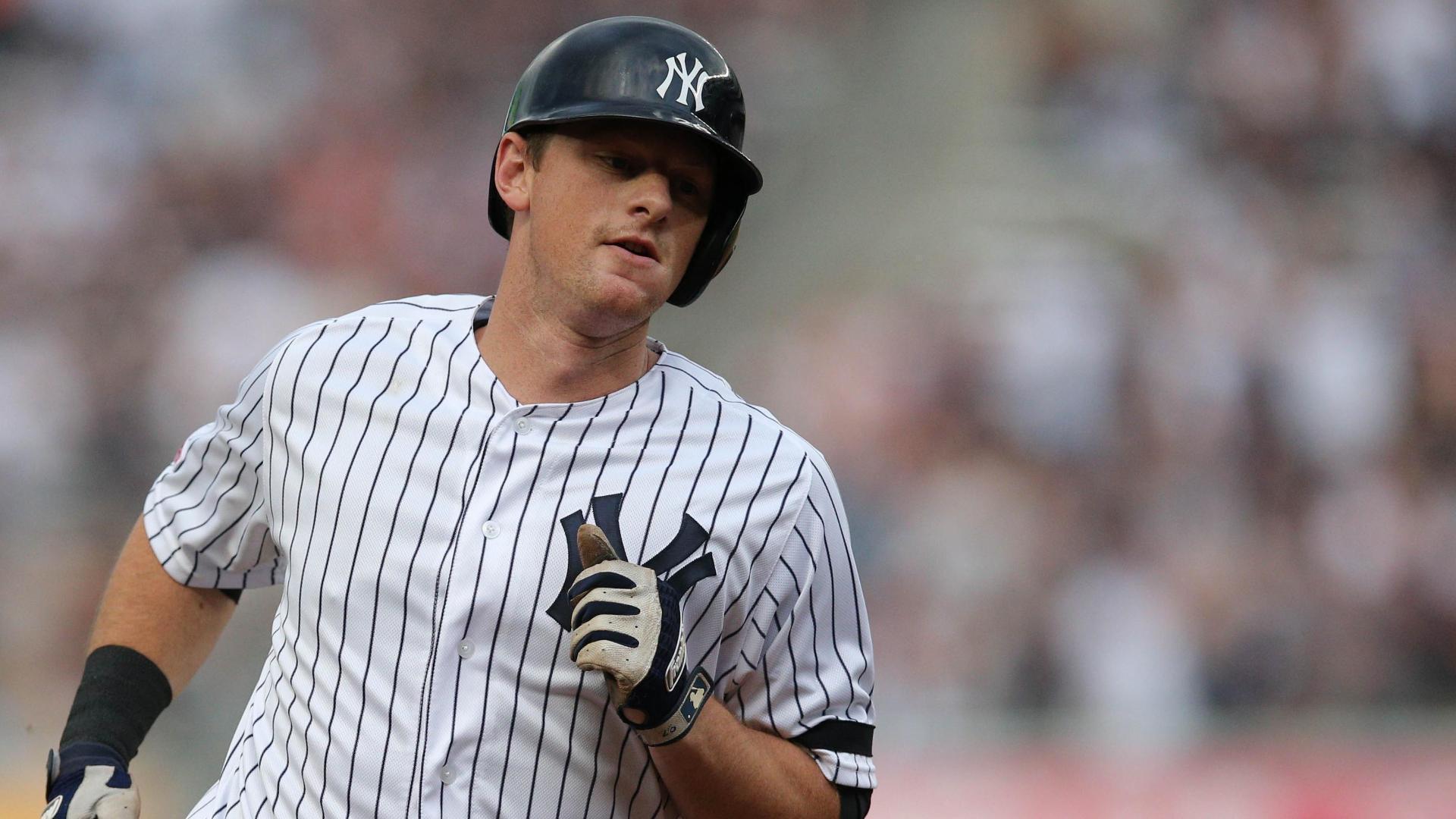 Yanks homer in MLB-record 28th straight game
DJ LeMahieu and Aaron Judge go back-to-back in the first, and Gleyber Torres goes deep in the second as the Yankees set the record for consecutive games with a home run, at 28. 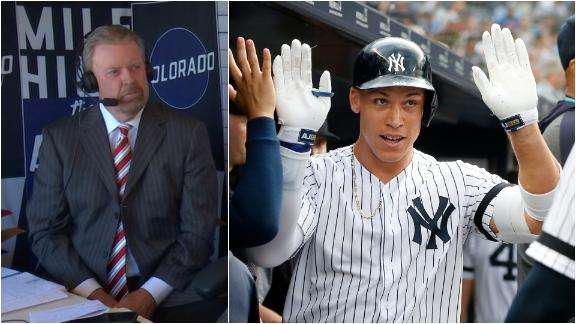