Redskins to Manziel: It isn't college 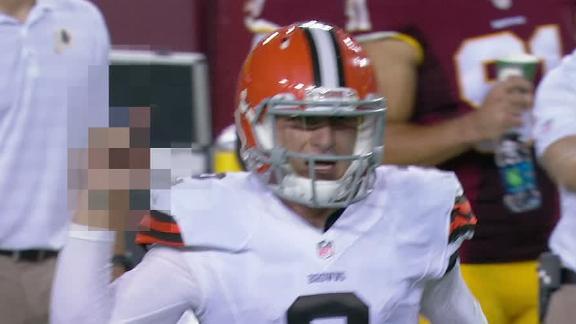 LANDOVER, Md. -- The Washington Redskins wanted to have a little fun with Johnny Football and get under the rookie quarterback's skin during Monday's preseason game.

They succeeded, as Cleveland Browns quarterback Johnny Manziel took offense to some vocal ribbing from the Redskins and flipped them off. The gesture was caught by TV cameras and most of the Redskins' sideline.

"I can tell you what the statement was that set him off," Redskins safety Ryan Clark told ESPN Radio's "Mike & Mike" on Tuesday morning. "The statement was, 'This isn't college anymore and these people are faster than you are.' He didn't like it. And that was me cleaning up the statement. That's pretty much what it was."

Clark wouldn't say who made the comment, only denying that it was him.

Rather than taking offense, the Redskins mostly found it funny.

"It was hilarious," said Redskins linebacker Brian Orakpo, who was pegged by one teammate as the instigator. "We were messing with him a little bit, just saying this ain't college and stuff like that. We were having a little fun.

"Manziel flipped us off. It was something funny. We were all laughing on the sidelines."

The gesture occurred late in the third quarter on an incomplete pass to Jonathan Krause. After the play, Manziel was near the Redskins' sidelines. As he ran back to the huddle, Manziel folded three fingers and raised the middle one.

"We saw it," Clark said after the game. "I don't care -- it's funny. Nobody cares; it's football. I'm sure if he had the opportunity to turn around and say it, he would have."

Not everyone saw Manziel's bird. Redskins linebacker Perry Riley responded with, "He did?" when asked about it.

But then he said, "I think we won that battle with Manziel. Him flipping us off, that's just extra."

Washington quarterback Robert Griffin III's news conference ended when he was asked whether he saw what happened. Receiver DeSean Jackson called it unfortunate and said Manziel needs to learn from the incident.

"Being young, things happen sometimes [and] you don't know better," Jackson said. "It's unfortunate he did get caught, but he'll learn from it. It's nothing too nice to do. We're out here competing with each other."

But Orakpo clearly wanted to egg on Manziel. Perhaps it had to do with the fact that Orakpo played collegiately at Texas, while Manziel starred at rival Texas A&M. Regardless, Orakpo and fellow outside linebacker Ryan Kerrigan talked about doing Manziel's money sign if they sacked him.

When Kerrigan did sack him, only Orakpo did the sign.

"I tried to get Ryan to do it with me," Orakpo said.

Said Kerrigan: "I thought about it, but that's not cool. That's not me. It would have been out of character. We talked about it before, but I chickened out."

Manziel On Performance, Obscene Gesture
Johnny Manziel comments on his performance against the Redskins and on his obscene gesture toward Washington's bench.