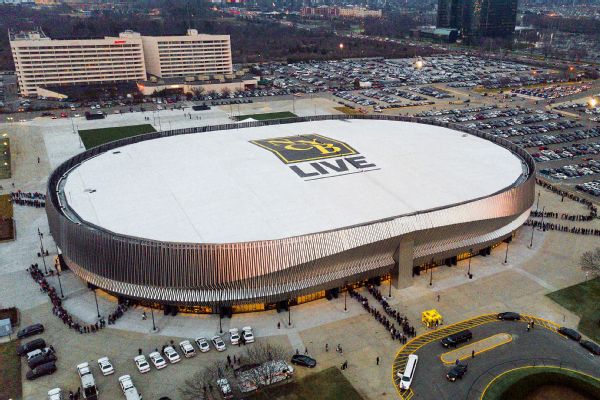 A prominent Long Island businessman says the operator of the Nassau Coliseum is preparing a pitch to bring back the New York Islanders.

Kevin Law, the president and chief executive of Long Island Association, told Newsday that Brooklyn Sports & Entertainment -- the operator of both the Barclays Center in Brooklyn and the Nassau Coliseum -- will offer to make further additional adjustments to the Coliseum.

The arena, located in Uniondale, New York, and home to the Isles for 43 seasons, recently underwent a $165 million renovation.

"Over the last two months, I have met with Brooklyn Sports & Entertainment, Islanders owners, I've met with the county and the state," Law told Newsday. "What I just learned very recently is that BSE will be offering a plan to the Islanders to move them back to the Coliseum."

NHL commissioner Gary Bettman, however, told WFAN on Thursday that the has his doubts.

"I haven't seen [the new Nassau Coliseum], haven't been in it," Bettman said. "In the final analysis, I think that's not a long-term option."

The Islanders moved to Brooklyn for the start of the 2015-16 season under a 25-year lease that was announced in 2012. But low attendance and criticisms of the game-day atmosphere at the Barclays Center has reportedly made the team explore the option of returning to Long Island.

That deal was reached after a failed attempt to secure public financing for a new arena on Long Island and zoning approval was rejected for a privately funded development plan that would have included renovations to the Coliseum. It also appeared to secure the Islanders' future in New York amid talk the team could move to another city.

According to the report, both sides can opt out of the deal and have 30 days after the end of the Islanders' season -- which was Sunday -- to trigger the start of the negotiating window, which lasts until the end of the year. Neither side has officially notified the other yet.

Newsday previously reported that local officials were in negotiations about building an entirely new hockey arena in Belmont Park.

"It makes no sense to build a new arena less than 10 miles away from the brand-new Nassau Coliseum," Law said.

Bettman, however, thinks a new arena would be "a good thing."

"The fact that they're looking at building a hockey-functioning building is a good thing," Bettman told WFAN. "The fact that they're looking at a lot of options in terms of where they can build it, I think that's all good. If I'm an Islander fan who lives in Nassau and Suffolk, I've got to be somewhere between excited and intrigued at the possibilities."
Related topics:
sportsespnnassau coliseumnhlkevin lawbrooklyn sports entertainmentrelocationbarclays centernew york islanders
Copyright © 2022 ESPN Internet Ventures. All rights reserved.
TOP STORIES
3 shot in Queens, including off-duty correction officer, police say
Bicyclist killed in hit and run; driver fled in another car with baby
2 Long Island beaches closed after lifeguard nipped by shark
2 dead, 2 seriously injured in Freehold crash
2 friends shot in cab on the way home from concert descibe incident
ESSENCE Festival makes triumphant return in New Orleans
Security incident at JFK Terminal 4 cleared
Show More
1 killed, several injured in shooting at mechanic shop in NYC
Thousands of dead anchovies wash ashore, fall from sky in California
3 dead, 3 critically wounded in Copenhagen shopping mall shooting
Where to watch 2022 Fourth of July fireworks
Macy's 4th of July Fireworks 2022: Everything to know
More TOP STORIES News