Rex Ryan says he was messing with Patriots about source 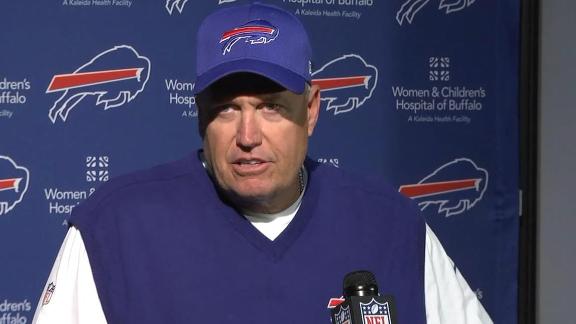 ORCHARD PARK, N.Y. -- Rex Ryan said Monday that he was trying to get inside the heads of those within the New England Patriots organization when he claimed Sunday that he had "sources" within the team that told him Jacoby Brissett would start at quarterback in the Buffalo Bills' 16-0 win at Gillette Stadium.

"Absolutely [I had sources], as far as you guys know," a smiling Ryan said Monday. "That's just great. Because, man, I stirred the pot. Because you know they're sitting back and going, 'Who is it? Who is it?' I was B.S.-ing the whole time.

"If people were worried about it, that's awesome. That's good. Let them think they got [someone inside]."

The Patriots did not reveal their starting quarterback until Sunday morning, when they declared Jimmy Garoppolo (shoulder) as inactive and Brissett, who had a thumb injury, as their only active quarterback.

However, Ryan said after the game that he was given inside information in advance.

"My sources inside the New England Patriot building said that Jacoby Brissett would be the quarterback," the Bills' coach said. "How about that? I'll stir some stuff up. Who was it? Who was it? I don't know who it was."

While Ryan was willing to stir the pot about Brissett, he tread carefully Monday when discussing a pregame fight that involved a group of Bills defensive backs and Patriots players and coaches.

"It had nothing to do with the outcome of the game," Ryan said. "We were there for one reason and one reason only, and that was to win a football game, which we can check that box off. So you can remember that."

Patriots receiver Danny Amendola, who was not involved in the fight, was upset about the altercation Monday.

"It pissed me off," Amendola told WEEI Radio. "I'm not going to forget about that. ... We're going to see them again."

Ryan says he was joking about Pats 'inside sources'
Rex Ryan says Monday he was joking the whole time about his comment Sunday that he had "sources" inside Patriots organization that told him Jacoby Brissett would start. Ryan wanted to get in the Patriots' head.