The possibility of a summer return for the NBA season has led to speculation that injured superstar Kevin Durant could rejoin the Brooklyn Nets in time for their postseason push.

But Durant's longtime business partner Rich Kleiman tamped down expectations for the former MVP on Monday morning, telling Golic & Wingo that hopes of Durant playing in June or July are "not very realistic."

"Honestly, not very realistic from my standpoint, and not even spoken about," Kleiman said.

Durant ruptured his Achilles tendon during the NBA Finals last June and signed with the Nets in July.

Nets GM Sean Marks has repeatedly stated that the team expects Durant to miss the entire 2019-20 season, given the traditional recovery timeline for Achilles injuries.

Sources told ESPN's Adrian Wojnarowski on Sunday that, given the widespread uncertainty about the coronavirus pandemic, NBA owners and executives are bracing for the possibility of mid-to-late June as a best-case scenario for the league's return.

Regular-season basketball in June would align with the expected 12-month recovery for Durant, but Kleiman was conservative when asked about that scenario.

"It feels like (Durant playing in the 2019-20 season) clearly was not something that was in the cards prior to all this," Kleiman said. "And now, I think just like the rest of the world, it's hard to take anything more than day by day.

"I think that Kevin is going to figure out the space that he needs to be in to continue to rehab during this time. But even that is hard to answer at this point, with the new kind of rules that were put in place last night."

The Centers for Disease Control and Prevention issued a recommendation Sunday night that no events or gatherings should include more than 50 people for the next eight weeks.

Sources told Wojnarowski that fears exist of a season completely lost, especially based on what some experts see as the slow response of the United States to flatten the curve of the coronavirus and make testing available on a widespread basis.

The Nets are 30-34 and currently are seventh in the Eastern Conference standings despite Durant's season-long absence and multiple injuries to Kyrie Irving, who has been limited to just 20 games. 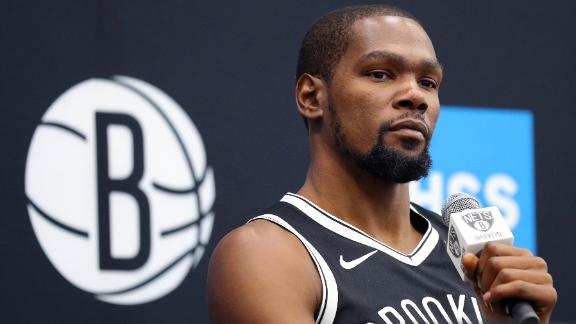