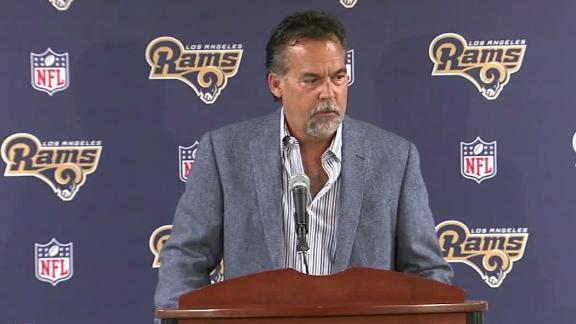 LOS ANGELES --Rams defensive end Robert Quinn has been discharged from the hospital and is expected to be with the team during practice on Tuesday, though his status for the upcoming game against the Miami Dolphins is still uncertain.

Quinn played in 83 percent of the defensive snaps during a 9-6 win over the New York Jets on Sunday, but checked himself into a Southern California-based hospital on Monday morning with a non-football-related illness.

Speaking late Monday afternoon, Rams coach Jeff Fisher said he was "very encouraged" with Quinn's progress. And though he wouldn't go into details about Quinn's medical condition, Fisher said it was "highly unlikely" that the latest issue had anything to do with the benign tumor Quinn was diagnosed with in high school.

A source told ESPN's Adam Schefter that Quinn had already been at the team facility earlier on Tuesday.

The 26-year-old was limited to eight games last season before ultimately undergoing back surgery and had played in seven of the Rams' nine games this season, compiling two sacks, two forced fumbles and two pass deflections. Quinn, the No. 14 overall pick in 2011, racked up 40 sacks from 2012-14, third-most in the NFL.