Rockets show image of Melo in No. 7 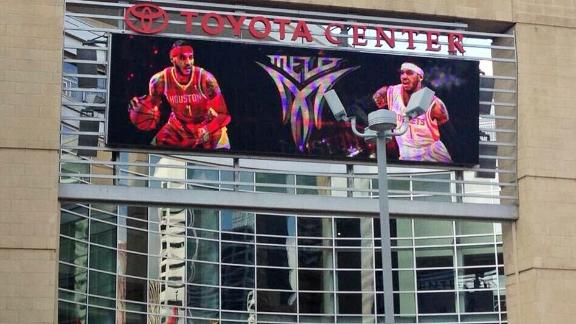 If it wasn't clear before Wednesday that Jeremy Lin's days with the Houston Rockets were numbered, it is now.

In an effort to court Carmelo Anthony, the Rockets posted pictures of Anthony in a No. 7 jersey in the windows near one of the entrances to the Toyota Center.

Anthony wore No. 7 with the New York Knicks, so it makes sense that they'd want to let him know how he'd look in Rockets red. The only problem? Lin currently wears No. 7 in Houston.

Lin responded to the development by tweeting a Bible verse Wednesday morning.

Luke 6:29 - If someone slaps you on one cheek, turn to them the other also. If someone takes your coat, do not withhold your shirt from them

- Jeremy Lin (@JLin7) July 2, 2014"It's always a challenging situation during free agency," Rockets general manager Daryl Morey said in an interview with FOX 26 Sports outside the Toyota Center. "You are always having to recruit players and there might be current players at current positions, might be people with the current numbers. It's unfortunate that it's often hard to handle.

"Reality is it's standard practice. When we went after Chris Bosh a few years ago, we had him in (Luis) Scola's number. When we went after Dwight Howard he had (Patrick) Beverley's number. I get the sensitivity and I hate that it creates some hurt feelings. I don't like that, but that's obviously Carmelo Anthony's number, that's the number he wants. He told us that. Bottom line, if Carmelo comes Omer Asik and Jeremy Lin have to be traded. It's just math. It's not personal. My job is every day figure out how to win. Sometimes it creates challenging situations."

Wednesday's visit in Houston was the second leg of Anthony's free-agent tour after he met with the Bulls in Chicago on Tuesday. He met with the Mavericks later Wednesday.

Among the contingent meeting with Anthony at the Toyota Center were Howard and guard James Harden, owner Les Alexander, Morey and coach Kevin McHale. Hall of Famer Clyde Drexler also is there to help with Houston's pitch.

Anthony's meeting in Dallas took place at the mansion of Mavericks' owner Mark Cuban, according to a source, and lasted over two hours. It was attended by Cuban, star forward Dirk Nowitzki, coach Rick Carlisle and president of basketball operations Donnie Nelson, sources told ESPN.

There was no pomp and circumstances from the Mavericks. Dallas' meat-and-potatoes pitch emphasized the opportunity to contend immediately with an elite coach in Carlisle, a selfless star in Nowitzki and a quality supporting cast featuring high-scoring guard Monta Ellis and defensive-minded center Tyson Chandler. The Mavericks also focused on the creativity and proven track record of the front office, stressing their plan to sustain a contender throughout Anthony's prime and ability to add at least one more major piece next summer.

Howard told KRIV-TV in Houston that he advised Anthony to take his time to make his decision and whatever team he picks "is going to be the right decision for him." He called Anthony a "great person" who "would be a great guy for our team."

"At the end of the day we all want to win a championship.That's why I came here. He would be a big part of that," Howard told KRIV-TV.

Most expect Lin to be moved in a trade to help the Rockets clear enough cap space to offer Anthony a near-max contract. There's an irony here because Anthony, according to reports, wasn't too thrilled when Lin garnered so much attention during his "Linsanity" run in 2012.

Several reports state that Houston already has a deal in place to move Lin if the Rockets get a commitment from Anthony. Houston will likely have to move Lin and the $8.3 million that his contract counts for on its books to acquire Anthony.

However, the Rockets have potentially created an awkward situation for next season if they fail to sign Anthony and Lin ends up back with the Rockets to fulfill the final season of his contract.

The Knicks are the only team that can offer Anthony a max contract worth $129 million over five years, but it's uncertain whether the Knicks will offer him a maximum contract.

The Bulls also greeted Anthony with an image of him in their team's jersey.

Chicago's rising interest in Gasol, sources said, is indeed a reflection of the Bulls' concern that -- despite their recruiting efforts Tuesday when Anthony came to town -- they will be unable to pry the All-Star forward away from the Knicks.

On Tuesday, the marquee in the front of the United Center showed Anthony as a Bull with the Larry O'Brien Trophy as the organization clearly tries to appeal to his stated desire to win, possibly even taking less money to do so.

Derrick Rose, who had previously said he wouldn't help recruit Anthony, was part of the Bulls' pitch meeting Tuesday. Rose declined comment as he left the United Center on Tuesday afternoon, but a source described the meetings, which included appearances from Joakim Noah, Taj Gibson and Rose, as "good" to ESPNChicago.com's Nick Friedell.

Anthony is scheduled to meet with the Los Angeles Lakers on Thursday in L.A.

The Knicks, meanwhile, expect to meet with Anthony after he concludes his visits with the Mavericks, Rockets and Lakers, sources told ESPNNewYork.com. The date and location of the Knicks meeting are unclear at this point.

Houston got the biggest prize in free agency last offseason when it signed Howard away from the Lakers, with designs on making a deep run in the playoffs this year. But the Rockets were bounced from the postseason in the first round just as they were the year before. So they started looking for more upgrades to the roster.

They made the first move to free up money for adding players by agreeing to a trade that will send Asik and cash considerations to the New Orleans Pelicans for a protected future first-round draft pick.