Royals' Ned Yost on All-Star balloting: If you don't like it, vote 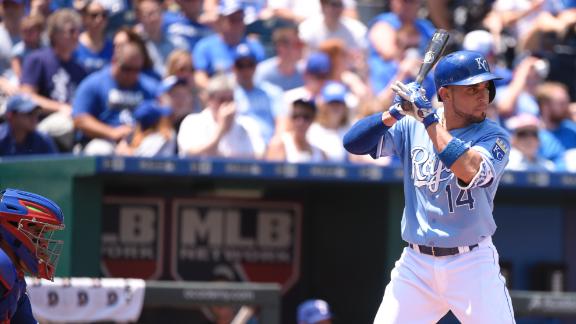 If baseball fans aren't happy with the Kansas City Royalsbeing kings of the hill when it comes to All-Star Game balloting, manager Ned Yost has a simple message: Vote.

According to the latest voting totals released Monday, eight players on the American League champion Royals are on track to start in the July 14 game at Cincinnati in what would be a record total for one team.

"There's nothing wrong," Yost told USA Today Sports. "Vote! The votes are the votes. If you don't like it, go out there and vote. Our fans have gotten out and voted. Does seven starters surprise you? Yeah. But once you sit back and think about it, it's really not that surprising."

On Monday, Omar Infante moved ahead of the Houston Astros' Jose Altuve in voting for the starting second baseman. Los Angeles Angels outfielder Mike Trout would be the only non-Royals player to start for the AL team if current voting totals hold. Voting runs through July 2.

Trout does not seem concerned that he may become a guest member of the Royals come July 14.

"Their fans are voting," Trout said. "I don't know. ... We have no control over the [All-Star] team. I'm sure our fans are out there voting, so it doesn't bother me."

"To be honest with you, I've never agreed with the All-Star voting," Gordon told USA Today Sports. "I always thought that guys most deserving, and having the best years, should go, especially now that the All-Star Game decides who wins home-field advantage. But it's a popularity thing now, and after getting to the World Series, we got popular.

"But we get seven guys starting at the All-Star Game, they'll change the rule. They'll have to. It will be like a home game. Nobody wants to see one team playing against the other All-Star team. It kind of ruins the point of an All-Star Game."

Fans elected seven Reds to start the 1957 game in St. Louis, but after concluding that half the fan ballots came from Cincinnati, baseball commissioner Ford Frick added Willie Mays and Hank Aaron to the NL lineup in place of Reds outfielders Gus Bell and Wally Post.

The long-struggling Royals ended a 28-year playoff drought last season and advanced all the way to the World Series, where they lost to San Francisco in seven games.

Royals may have eight players starting ASG
The Baseball Tonight crew discusses the latest All-Star Game voting totals, eight players on the American League champion Royals are on track to start in the July 14 game at Cincinnati in what would be a record total for one team.