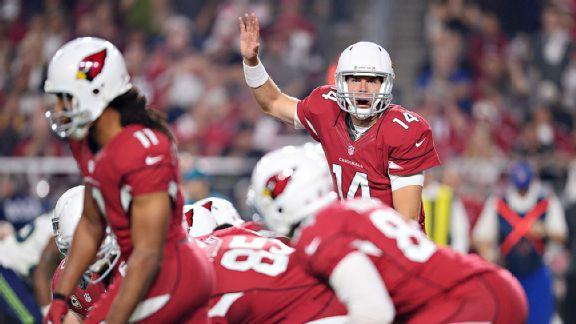 "Drew is not going to be able to play," Arians said.

Arians confirmed the decision to start Lindley after Thursday's practice.

"He is close," Arians said of Stanton. "But there's no way I'm risking it."

Stanton, who didn't practice this week, will miss his third straight game as he continues to recover from a right-knee injury suffered in Week 15 against St. Louis. He won't dress in Carolina, Arians added.

Lindley is 1-5 as a starter in his three-year career and is 0-2 this season in place of Stanton.

He played one of his best games in the NFL last Sunday in San Francisco, completing 59 percent of his passes while throwing for a career-high 316 passes and averaging a career-high 8.1 yards per attempt. He also threw the first two touchdown passes of his career, the first coming on his 229th attempt, ending an NFL-record streak of passes without a touchdown.

Arians said Thursday he has never played a quarterback in the playoffs with as little experience as Lindley.

Lindley will be the seventh quarterback since the 1970 NFL merger to start a playoff game with one or fewer regular-season wins as a starter, according to the Elias Sports Bureau. Those quarterbacks have a combined 2-4 record. The last quarterback to win under those circumstances was the Houston Oilers' Gifford Nielsen in 1979.

The Cardinals leave for North Carolina on Thursday night and will hold a walk-through Friday.

Cardinals All-In On Lindley
Pedro Gomez and Josh Weinfuss break down the keys to Cardinals quarterback Ryan Lindley being successful in his first playoff start.