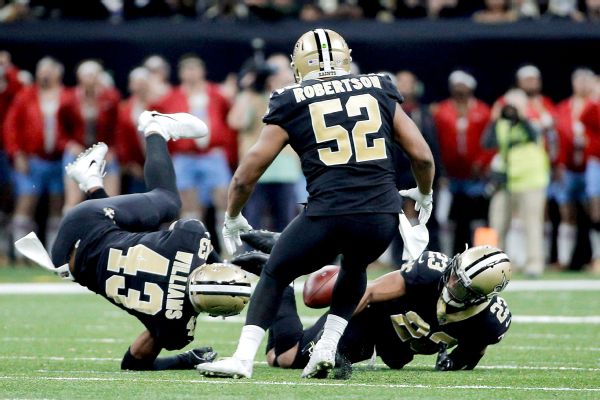 Saints rookie cornerback Marshon Lattimore intercepted a pass late in the second quarter that actually came to rest on his butt as he lay face down -- before he secured it against his backside with help from teammates Marcus Williams and Craig Robertson.

This one might not wind up being immortalized with a statue outside the Superdome like Steve Gleason's blocked punt against the Falcons when the Saints reopened the building after Hurricane Katrina in 2006, but it might have even bigger playoff implications.The Saints (10-4) and Falcons (9-5) are jockeying for position in the NFL's tightest division race.

Social media immediately erupted with references to the #buttpick and #buttinterception, as well as comparisons to the New York Jets' infamous "butt fumble" from five years ago.

Meanwhile, the Saints made it count by turning the momentum into a quick 54-yard touchdown pass from Drew Brees to Ted Ginn Jr. three plays later for a 13-0 halftime lead.

The interception was Lattimore's fifth of the season and second in three weeks against Atlanta as he looks to cement his place as the front-runner for NFL Defensive Rookie of the Year.