Sam confident he'll 'be on a team' 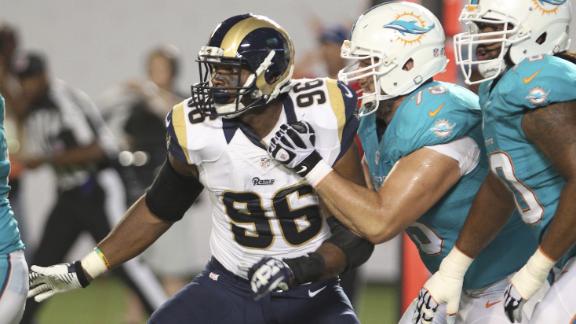 Sam and the Rams closed their preseason with a 14-13 loss to the Miami Dolphins on Thursday night.

Sam led all Rams with six tackles while playing a position he'd only seen action at in practice before Thursday night. With primary backup ends William Hayes and Eugene Sims not playing because of injury issues and starters Robert Quinn and Chris Long sitting out, the Rams were thin at defensive end.

That left plenty of snaps for Sam and fellow rookie Ethan Westbrooks. The lack of ends forced the Rams to tweak their defensive scheme a bit as they played exclusively with three down linemen. Despite the different look, the Rams held Miami to 2.7 yards per carry on 29 attempts.

In the team's four preseason games, Sam finished with 11 tackles and three sacks.

"I believe he can play in this league," Rams coach Jeff Fisher said after the game.

The deadline for roster cuts is Saturday at 4 p.m. ET. The Rams have until then to trim their roster from 75 to 53 players.

Sam plans to pass the time by traveling back to his alma mater, Missouri, for its regular-season opener Saturday against South Dakota State.

Sam Makes Six Tackles In Preseason Finale
Michael Sam had six tackles in the Rams' 14-13 loss to the Dolphins.

Sam: 'I Know I Can Play In This League'
Michael Sam addressed the media after the Rams' preseason finale.