Saquon Barkley taken by Giants at No. 2 as team bolsters offensive attack 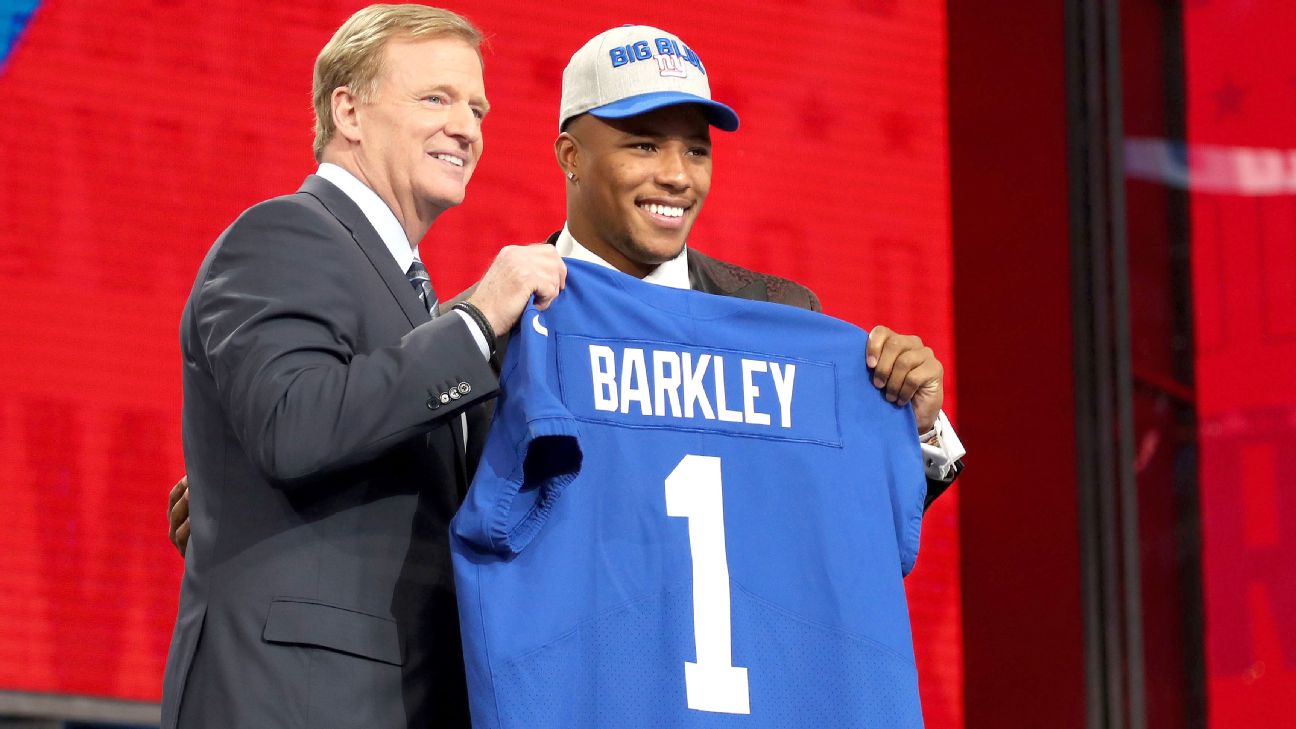 The New York Giants added another weapon to their offense with the selection ofPenn Staterunning backSaquon Barkleywith the No. 2 overall pick in the draft on Thursday night.

Beckham FaceTimed with Barkley not long after the pick, and Manning sent him a congratulatory text. Beckham and Barkley did some training together in Los Angeles this offseason.

"I'm just truly excited to be a part of the New York Giants," Barkley told ESPN after being selected. "When I got to visit their program, I fell in love. You walk in, you see the Super Bowls right away -- and you see that team's about winning, and hopefully I can go there and help as quickly as possible."

The Giants bypassed the perceived need for a franchise quarterback even though Manning is set to turn 38 before the end of this upcoming season and last year's third-round pick, Davis Webb, remains a virtual unknown. The Giants' offense finished 31st in the NFL last season, averaging 15.4 points per game.

It's been quite a week for Barkley, who became a father Tuesday. He will immediately become one of the league's top-paid running backs, and his draft slot guarantees him the most money of any running back in the NFL.

"It's truly amazing. I was telling people it's like it's from a movie or book," Barkley told ESPN. "It's an honor, and I'm just thankful that I can have the two biggest blessings in my life. First and foremost, having a daughter -- a beautiful daughter, Jada; and then being able to play for a franchise like the New York Giants. It's an honor, and ... I don't even know how to explain it right now, I'm just so thankful."

The Giants didn't seriously contemplate selecting quarterback Sam Darnold, who went to the New York Jets at No. 3, or making a trade. Barkley was Gettleman's highest-ranked prospect since Peyton Manning in 1998.

Gettleman told the Giants' website he instructed his lieutenants to not field calls after the Cleveland Browns selected quarterback Baker Mayfield No. 1 overall.

It didn't matter that Darnold was on the board. Gettleman said he could've turned in the card for Barkley with 9:58 remaining on the clock. Each team gets 10 minutes to make its selection.

Barkley rushed for 3,843 yards and was the two-time Big Ten Offensive Player of the Year at Penn State. His 5,538 all-purpose yards, 53 total touchdowns and 43 rushing touchdowns were school records. The Giants were enamored with Barkley from the start of the process, and their offseason moves sent them in the direction of the draft's top running back.

Barkley validated his on-field success with an eye-opening combine and was atop more than a few teams' draft boards. He ran the 40-yard dash in 4.4 seconds, did 29 reps on the bench press and had a 41-inch vertical jump.

The Giants weren't concerned about taking a running back with such a high pick. Gettleman values the position, especially with a team that doubled down on its veteran quarterback this offseason.

"You know what I say about that. I think it's a crock," Gettleman said of the notion that running backs have been devalued. "At the end of the day, a great player is a great player. [Former Giants general manager] Ernie [Accorsi] and I have talked about it a lot. He's a touchdown maker. He's a threat to take it to the house every time he gets his hand on the ball. Like I said, a lot of that is nonsense. I think it's someone who had this idea and got into the analytics of it and did all these running backs and went through whatever. Hey, [Giants running back] Jonathan Stewart is in his 10th year and he's hardly lost it."