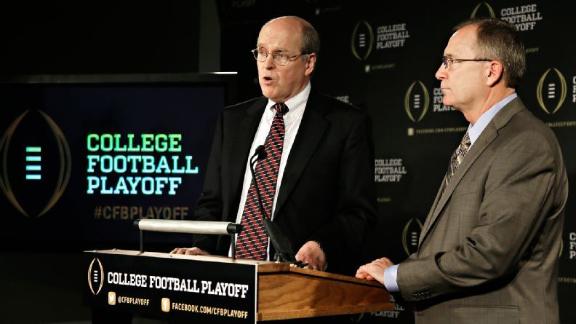 IRVING, Texas -- Because of the new College Football Playoff, the New Year's Eve and New Year's Day bowl lineups will be a lot less cluttered.

The Outback and Capital One bowls will remain on New Year's Day, but they will be the only nonplayoff games on Dec. 31 or Jan. 1, conference officials told ESPN.

In each of the past seven years, there have been 10 to 12 bowls played on Dec. 31 and Jan. 1. However, this season there will be only eight -- with five of those games played in exclusive time slots.

The only bowls played on Dec. 31 will be part of the playoff's six New Year's-specific bowls. The Peach will have the early kickoff, followed by the Fiesta and then the Orange. Exact game times have not been determined.

The playoff semifinal bowls are the Rose and Sugar. The Rose will start about 5 p.m. ET, followed by the Sugar.

With the playoff bowls taking over New Year's Eve and New Year's Day, a number of bowls are moving off those dates.

The Taxslayer Bowl, formerly the Gator Bowl, was a fixture on Jan. 1 for the past 19 seasons. But the Jacksonville, Fla., game announced it would move to Jan. 2. The Heart of Dallas Bowl, played on Jan. 1 last season, also is moving to a new date.

A couple of Dec. 31 regulars also are changing dates. The Sun Bowl has been played on New Year's Eve the past six years and 10 of the past 11, but this year's game is tentatively set for Dec. 27.

The Liberty Bowl, played on Dec. 31 the past four years and 12 of the past 17, also is moving off that date. The game could be played a few days after New Year's Day, sources said.

There will be a record 39 bowl games this coming season, up from 35 in 2013. One of the 39 is the playoff's title game, so 76 teams will be required to fill the 39 bowls this season. Already two schools -- UNLV and Idaho -- were declared ineligible because of APR violations. Penn State also remains bowl-ineligible in the wake of the Jerry Sandusky scandal.