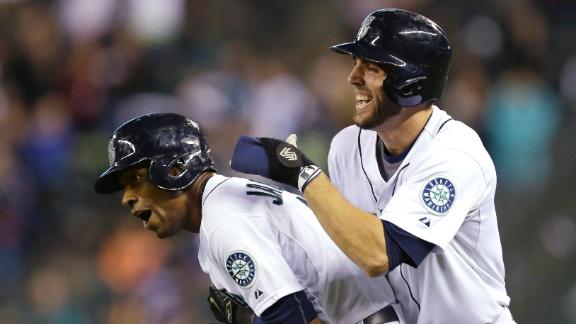 Hernandez failed to field a bunt by Josh Thole during a seven-run fifth inning in Tuesday's 10-2 loss at Toronto, a play called a hit by official scorer Herb Morrell. Major League Baseball Executive Vice President Joe Torre changed the decision to an error Saturday, making the final four runs of the inning unearned.

Hernandez's ERA dropped from 2.34 to 2.18 going into his final start of the regular season on Sunday against the Los Angeles Angels.

Chris Sale of the Chicago White Sox, who made his final scheduled start Wednesday, leads the AL at 2.17.

"He's got an opportunity tomorrow to go and win an ERA title," Seattle manager Lloyd McClendon said of Hernandez, who led the AL in 2010 at 2.27.

McClendon said the Mariners asked MLB to review the play. He doesn't think the decision was influenced by the ERA race.

Mariners Stay Alive With Walk-Off
Austin Jackson drove in the winning run in the 11th to lift the Mariners to a 2-1 win over the Angels.