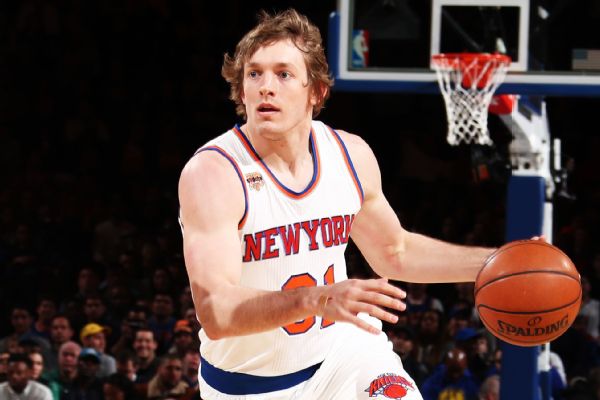 The Knicks used their full room exception to bring back Baker, who announced on social media that he'd agreed to stay with New York on July 1.

The Baker agreement leaves the Knicks with little money at the moment to offer free agents.

Barring a trade, New York has under $1.5 million left in cap space and veteran's minimum exceptions to offer free agents.

The Knicks' surprising pre-emptive commitment to Baker is the second free agent agreement handed out by the club that has raised eyebrows around the league.

The Knicks, under general manager Steve Mills, signed shooting guard Tim Hardaway Jr. to a four-year $71 million offer sheet that the Atlanta Hawks -- Hardaway's incumbent club -- declined to match. The contract has been met with shock inside and outside the organization, according to ESPN's Wojnarowski and Ramona Shelburne.

It's unclear if Baker, a restricted free agent, had drawn interest from other teams willing to pay him a salary comparable to his agreement with New York.

The 24-year-old guard averaged 4.1 points and 2.1 assists in 13.5 minutes per game last season for New York. Signed as an undrafted free agent in 2016, Baker started 13 games for New York, mostly down the stretch of the regular season.

The Knicks have been in touch with several veteran point guards, including Rajon Rondo, during free agency with the hopes of signing one to mentor Ntilikina. They don't have much to offer free agents at the moment but could create some cap space via trade. One potential trade involves star forward Carmelo Anthony.

Wojnarowski reported last week that the Houston Rockets had been persistent in their pursuit of Anthony, who is willing to waive his no-trade clause to join Chris Paul and James Harden in Houston. The Knicks do not imagine a scenario where Hardaway is sharing the floor with Anthony to start the season, sources told Wojnarowski.

As of late last week, both the Knicks and Anthony felt confident about the possibility of completing a deal that would send Anthony out of New York, league sources said.
Report a correction or typo
Related topics:
sportsespnnew york knicksron bakernba
Copyright © 2020 ESPN Internet Ventures. All rights reserved.
More Videos
From CNN Newsource affiliates
TOP STORIES