Serena: Comments 'in a way bullying' 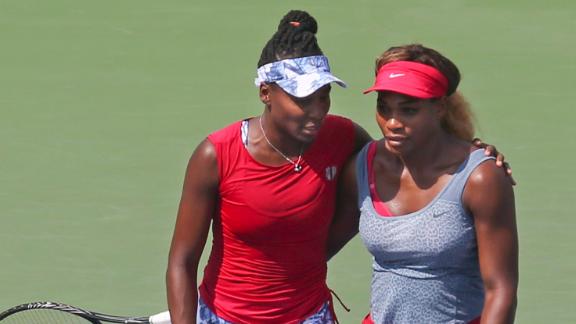 SINGAPORE -- Serena Williams says comments by the head of the Russian Tennis Federation referring to her and older sisterVenusas "brothers" were bullying, sexist and racist, and that she supported the one-year suspensionimposed by the WTA against the official.

Shamil Tarpischev was also fined $25,000 for making the comments on Russian television. He said the sisters were "scary" to look at.

"I think the WTA did a great job of taking [the] initiative and taking immediate action to his comments," Williams said Sunday in Singapore ahead of her WTA Finals defense. "I thought they were very insensitive and extremely sexist as well as racist at the same time. I thought they were in a way bullying."

Asked whether he regretted his comments, Tarpischev told The Associated Press on Saturday at the Kremlin Cup that the program on which he spoke was "a humorous show." When asked about his ban, Tarpischev said: "I can't comment. I don't understand it."

In a statement released later by the Russian Tennis Federation, Tarpischev denied any "malicious intent" and said his quotes had been taken out of context.

The WTA said it would seek his removal as chairman of the Kremlin Cup tournament, which ends Sunday.

"I think they were very disrespectful and uncalled for, and I'm glad that many people have stood up, including the WTA. It was very inappropriate, especially in his position and all the responsibilities that he has not just in sport, but being part of the Olympic committee," she said.

Tarpischev has been chairman of the Kremlin Cup, Russia's only WTA event, for all of its 18 years as a women's tour event, and is also a member of the International Olympic Committee. During the 1990s, he was the personal tennis coach to Russian president Boris Yeltsin and served as his adviser on sports matters.

He made his comments during an appearance on a Russian talk show this month alongside former Olympic singles champion Elena Dementieva. When Dementieva was asked what it was like playing against the Williams sisters, Tarpischev interjected and called them the "Williams brothers." He also said that "it's scary when you really look at them."

Williams, the world number 1 at the age of 33, is going into the WTA Finals on the back of another stellar year, winning six titles including the US Open. But she pulled out of the China Open earlier this month with a knee injury, triggering some concerns she might not make the Singapore event.

The draw for the year-end competition -- starting Monday at the 10,000-capacity Singapore Indoor Stadium -- puts Williams in the Red Group with 23-year-old Simona Halep and 20-year-old Eugenie Bouchard as well as the more experienced Ana Ivanovic, the only one of her three opponents ever to beat her.

Williams said doctors only allowed her to start hitting the ball in practice again last week.

"They thought it was very bad for me to hit sooner than that," she said. "After that, I just, like I said, started training. I was surprised at how well I was able to kind of jump back into it."