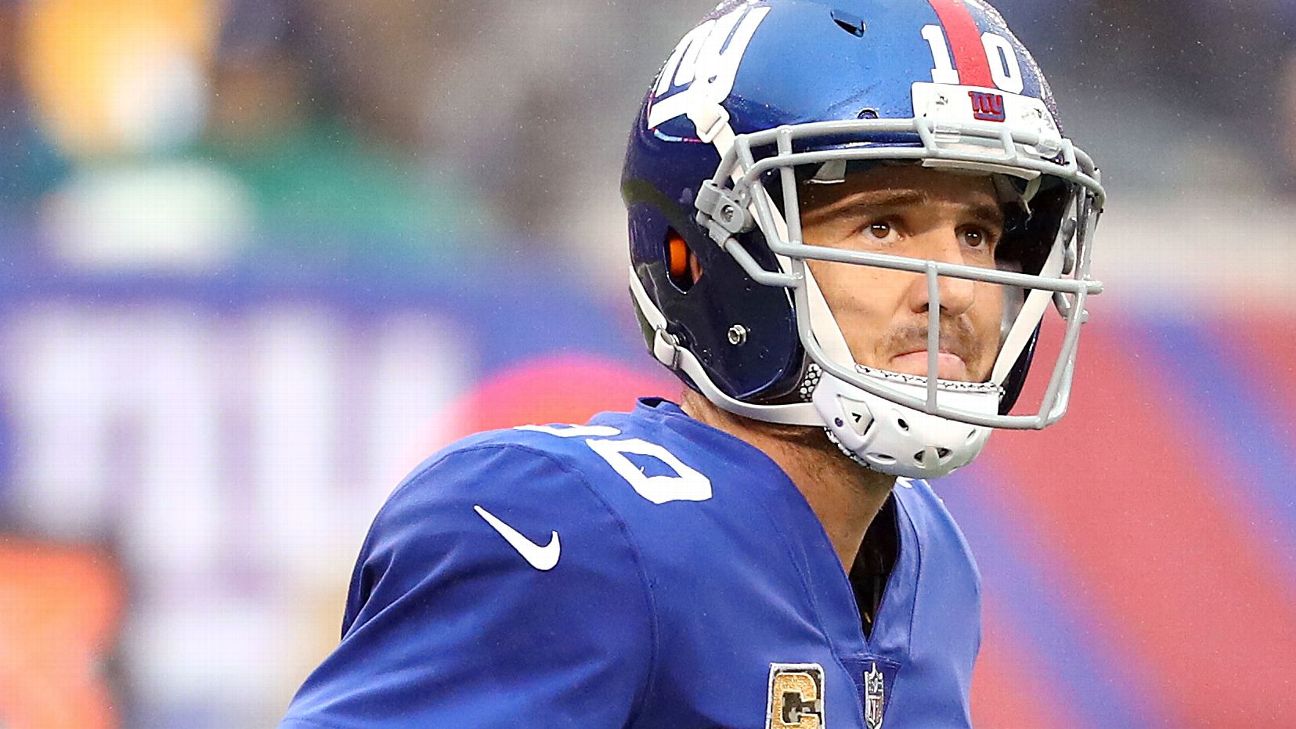 ESPN
Three sports memorabilia collectors who accused New York GiantsquarterbackEli Manning of providing bogus "game-worn" equipment that was sold to unsuspecting fans settled their lawsuit against the Super Bowl-winning quarterback on Monday, days before the case was scheduled to go to trial.

A spokesman for the defendants, a group that included Manning, the Giants, two equipment managers and Steiner Sports, the company with whom Manning is under contract to provide game-worn jerseys and helmets for sale, said Monday night that a settlement had been reached to resolve the claims. Details were not given.

The attorneys for both sides issued a joint statement that read: "[Plaintiffs] Eric Inselberg, Michael Jakab and Sean Godown have resolved all claims in their pending litigation against the New York Giants, Eli Manning, John Mara, William Heller, Joseph Skiba, Edward Skiba and Steiner Sports, in accordance with a confidential settlement agreement reached today. The compromise agreement, entered into by all parties, should not be viewed as supporting any allegations, claims or defenses."

"All parties are grateful to have the matter, which began in 2014, concluded and are now focused on football, the fans and the future," the statement added.

Inselberg, Jakab and Godown had sought triple the amount of their alleged losses -- which totaled less than $20,000 combined -- for buying two helmets billed as worn by Manning. They also had sought punitive damages and claimed in court filings they would produce evidence that would "show that Manning engaged in a pattern of knowingly providing items to Steiner Sports that he misrepresented as having been game-used when he knew they were not."

Manning and the Giants had denied the allegations and characterized the suit as "inflammatory and baseless" in court filings.

Jury selection was to have begun this week, but a death in the family of one of the attorneys had pushed that back to next Monday.

Fourteen lawyers representing all parties involved in the case gathered Monday at the Bergen County Justice Center for the first day of the civil suit. The plaintiffs' lead attorney, Brian Brook, said after the judge went over the logistics and housekeeping that he had been receiving the "silent treatment" from the other side. Brook said he had never experienced anything like it.

When they left the courthouse before noon, there was little optimism from all parties involved that a settlement would soon be reached. Nine hours later, however, it was finished.

Inselberg filed the lawsuit in 2014. The suit claimed two helmets purchased by Inselberg and the two other plaintiffs -- including one purportedly used by Manning during the Giants' 2007 Super Bowl season -- were bogus. Inselberg alleged photographic experts, using a technique called "photomatching," could not find evidence that the helmets were ever used in games.

The Giants and Manning contend photomatching is unreliable because it does not take into account that helmets are routinely reconditioned during or after a season, the evidence of which might be found on the inside of the helmet and not the outside.

The stakes were raised in the lawsuit in April 2017 when Inselberg's attorneys filed court documents that contained emails between Manning and equipment manager Joseph Skiba, who also was a defendant in the lawsuit. In one email, Manning asks Skiba to get "2 helmets that can pass as game used."

The email does not refer to the two helmets at issue in the lawsuit, but Inselberg alleged it indicated a pattern of fraud.

When the emails went public last year, Manning angrily denied any wrongdoing. In a court filing this month, Manning's attorney wrote that the email was intended to ask Skiba for two game-used helmets that would "satisfy the requirement of being game-used."

In the same court filing, Manning's lawyer accused Inselberg of being "engaged in a decades-long memorabilia scheme" in which he obtained, without permission, game-used Giants equipment, including Manning's, from Skiba and Skiba's brother, Ed, as well as a local dry cleaner.