Severino bit erratic for Yankees in 9-4 loss to Rangers 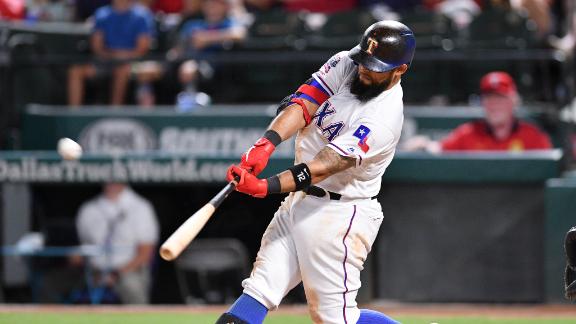 ESPN
ARLINGTON, Texas -- Luis Severino was a bit erratic but got through some adversity in his third start of the season for the New York Yankees. The next time he is on the mound for the AL East champions will be in the playoffs.

"All in all, enough of a buildup as we head into the playoffs," manager Aaron Boone said. "Obviously not as sharp as he was in his last two, but I thought a nice rebound from the first inning where he struggled a little bit."

Severino had four walks and a throwing error over three innings in the Yankees' 9-4 loss to the Texas Rangers on Saturday night.

Rougned Odor had a career-high six RBI for the Rangers, including his 30th homer for a grand slam in the sixth to make it 8-1.

Odor put the Rangers ahead to stay with a two-run double in the first, the only hit and runs allowed by Severino (1-1). The right-hander had already walked two batters and committed his error on a pickoff attempt by then.

After three walks in the first inning, Severino retired seven of the last eight batters he faced. After feeling uncomfortable in the first, he struck out the side in the second -- all swinging.

"In the second and third I felt more like myself," he said. "It was everything. I didn't feel like myself (in the first). ... The fastball was all over the place. Stride, I changed everything."

When asked if he was ready for the playoffs, Severino responded, "Yeah, of course. That was not my best start, but it doesn't matter. The most important thing is that I feel healthy."

Severino has pitched only 12 innings this season after recovering from a lat injury that had sidelined him since spring training. A 19-game winner in 2018, he struck out four while throwing 72 pitches against 14 Texas batters. He had tossed nine scoreless innings before that, four against the Los Angeles Angels and five against Toronto with nine strikeouts last Sunday.

The Rangers played the final night game at their ballpark before moving across the street to a new stadium next season. A day game Sunday wraps up the 26th and final season at the stadium that opened in 1994 as The Ballpark in Arlington.

Odor raised his batting average from .202 to .204, still the lowest among the 136 major league qualifiers. But he has 93 RBI along with the 30 homers, nine in September.

"He's finishing strong. The only thing I really challenge is the season's going to end after tomorrow," manager Chris Woodward said. "I hope he has some truth and some understanding of what he's doing right now, because if this is the guy we could have all year, we'd have a superstar."

Yankees leadoff hitter DJ LeMahieu went 0 for 3, his average slipping two points to .329. He trailed White Sox shortstop Tim Anderson (.337) for the major league lead. Anderson didn't play in the first game of Chicago's doubleheader before going 0 for 2 in the nightcap.

The Yankees led 1-0 after Aaron Judge tripled on a towering flyball to the left-center gap in the first and scored on a sacrifice fly by Brett Gardner. They didn't score again until Didi Gregorius had a three-run double with two outs in the ninth.

Yankees: New York got encouraging news about another starter when an MRI showed only nerve irritation for James Paxton. The lefty was removed after the first inning of the series opener Friday night, his last start before the playoffs, because of tightness and discomfort in his buttocks.

Paxton, who had won 10 consecutive starts before that no-decision in the Yankees' 14-7 win, said he was taking some pills to calm the irritation. Boone considered it minor and said he wasn't even concerned about it.

Encarnacion said after the game he's feeling much better.

He said he would be ready to play Friday in the Division Series opener against Minnesota even though he's not ready for a game just yet.

"I don't want to have a setback," Encarnacion explained.

The Rangers play their 2,081st and final regular-season game at the ballpark they have called home since 1994. They are moving across the street next season to a new $1 billion-plus stadium with a retractable roof. Masahiro Tanaka (11-8) is expected to pitch for the Yankees, but might not start. Lance Lynn (15-11) goes for the Rangers.