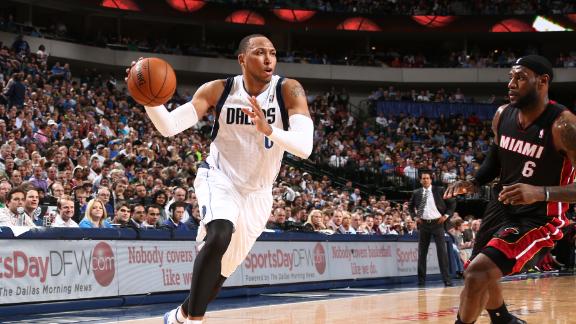 Free-agent forward Shawn Marion has committed to sign with the Cleveland Cavaliers, according to league sources.

Sources told ESPN.com that Marion informed the Cavaliers this weekend that he intends to sign with them this month, despite the fact that Cleveland can only offer him a minimum deal.

The chance to play with LeBron James and immediately compete for a championship, sources said, clinched Marion's decision to choose Cleveland in the face of a ramped-up pursuit by the Indiana Pacers.

As ESPN.com reported earlier this week, Pacers president Larry Bird invited Marion to Indianapolis earlier this week for a face-to-face recruiting pitch over dinner, with Indiana in desperate need of veteran help on the wing after the season-ending compound leg fracture suffered by star swingman Paul George on Aug. 1.

At a news conference Tuesday, Bird conceded that the Cavaliers were the favorites for Marion's signature, saying: "What I came away with was he's undecided with where he wants to play and what he wants to do. But he does want to play for a contender."

The Cavaliers have widely been considered to be the front-runners to sign Marion since it emerged that they're poised to complete a trade for Minnesota's Kevin Love later this month. Cleveland is restricted to offering Marion a minimum salary of $1.4 million this season after using all of its cap resources and exceptions elsewhere.

The Pacers confirmed this week that they've already been granted a $5.3 million disabled player exception by the league in the wake of George's season-ending injury suffered on Team USA duty, so Indiana did have the means to outbid Cleveland. But the Pacers would stray into luxury tax territory if they spend more than $1.7 million of that exception, with Bird vowing at his news conference that Indiana -- maintaining a longstanding team policy -- remains unwilling to be a tax team.

Sources say that Marion had been telling teams for weeks that he hoped to wind up with a championship contender if he left the Dallas Mavericks in free agency. Marion spent the past five seasons with the Mavs and helped them win the first championship in franchise history in 2011 as a key role player who guarded players at four positions.

A week before his Indiana trip, Marion traveled to Cleveland to meet with Cavaliers general manager David Griffin and new coach David Blatt. Marion and Griffin have a longstanding relationship dating to their days together with the Phoenix Suns, during which the 36-year-old made four trips to the All-Star Game.