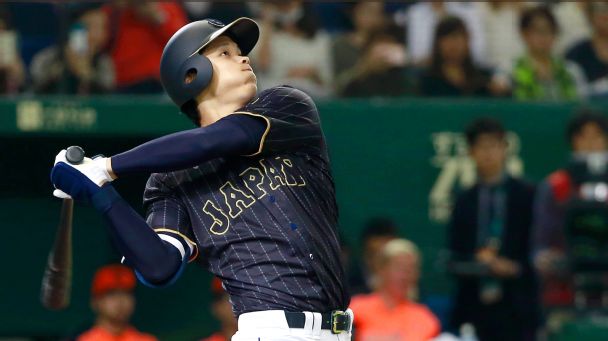 Editor's Note: The story was originally published on June 15.

Ninety-seven years ago, the Yankees made a decision that would help draw the line separating the olden days from the modern era: They let the greatest hitter the game had ever seen focus on his hitting.

Babe Ruth, a league-average starter in 133 innings for Boston the year before, would appear on the mound only once in his first season with New York in 1920. Instead, playing every day in the outfield, he would hit 54 homers, nearly doubling the single-season record and setting an OPS mark that wouldn't be topped until the next century. The modern slugger was born. Simultaneously, the two-way baseball star was dead. There would, it seemed for almost 100 years, never be another one.

Suddenly, though, we're living in the golden age of -- well, the golden age of hoping for a golden age of two-way stars. This week, a baseball fan reading her usual allotment of baseball news would have seen three plausible paths to a 21st-century Babe: The Reds used the second overall pick in the amateur draft to take Hunter Greene, a high schooler who throws 100 mph, hits mammoth blasts with a wood bat and dreams of doing both as a professional; the Rays used the fourth overall pick on Brendan McKay, possibly the best college pitcher and best pure hitter in the draft, who will embark on the extremely rare double-development path in the Tampa Bay system; and Shohei Otani breathed in, then out, 23,000 times per day, doing his part to keep our hopes alive merely by existing.

Otani, the Japanese Babe Ruth, is already a phenomenon: He throws as hard as Noah Syndergaard and hits baseballs as far as Bryce Harper, and as a starter/designated hitter last year he led Nippon Professional Baseball in both ERA and OPS. He will be pitching in the majors soon, if not next year, then certainly within the next three. He wants to keep hitting, too, and he might have real leverage to make skeptical teams take his request seriously.

But there's a paradox that helps explain why a great two-way player is so unlikely: Becoming a great two-way player requires a player to be great at both offense and pitching, but being great at either one makes a team less willing to experiment with you. You become the bird in the hand, which, we all know, is worth two in the bush.

That's what teams -- the Reds, the Rays, the 30 teams that will covet Otani and the one team that ultimately signs him -- need to figure out. In the WAR era, "figuring out" is supposed to be easy; so much can be stated as runs in an equation. In this case, though, there are at least a half-dozen crucial variables, each one of them unknown -- perhaps, unknowable.

The first unknown, and in some ways the simplest unknown, is how good Otani is as a pitcher. That's our baseline: If his future employer treats him like we treat every other great pitcher, how great would he be?

Here's what Otani did last year for the Nippon-Ham Fighters, the same NPB team Yu Darvish once pitched for:

NPB play is somewhere between Triple-A and the majors -- slightly closer to Triple-A, according to ZiPS creator Dan Syzmborski. But unlike Triple-A, NPB is stylistically quite different from the majors, and the opponents aren't just "a little bit worse" than major leaguers but also a little bit different. Not all Japanese pitchers make the transition to the majors equally.

Here's how the three most recently hyped Japanese pitchers did in their final NPB seasons:

Otani compares well to all of them. Darvish is a Cy Young candidate when healthy; Tanaka has been an All-Star and received down-ballot Cy Young votes; Maeda has been a league-average pitcher. If Otani hit the middle mark -- Tanaka -- he'd project to be worth around 3.5 WAR over 180 innings and allow about 75 runs.

That's incredibly valuable. That's a pitcher who'd be worth $30 million or so per year, and he's only 22, which means the club that signs him could keep drawing ace-level value for years with relatively minimal risk. Unless it introduces extra risk.

The cost of using him to hit

How much would a pitcher's performance decline if he were also hitting on his days off?

Perhaps pitchers going on short rest can give us some idea. We see this every postseason, when an ace is rushed back on three days' rest. Those pitchers, thrown out of the regular rhythm of the five-man rotation, working with a bit more fatigue, see their ERAs rise by nearly a run (or more). If Otani's ERA rose by a run, he would allow roughly 20 more runs in a season, and his WAR would be nearly halved.

Of course, perhaps pitchers going on short rest gives us no idea. All the two situations have in common is a vague notion of less recovery time, but we don't know whether 25 percent fewer recovery days is in any way comparable to the strain of four extra at-bats, a sprint around the bases, some between-innings dry swings in the cages, an extra 15 minutes of BP and two sets of stretches every day. We don't know whether the strain would be relieved if he were relaxing on the bench the day before and the day after each start and if he only DH'd the two days in between. We don't know whether being distracted by the second role would matter, especially for a player going through the league the first time, learning hundreds of new batters (and a new culture).

We don't know how much worse the strain would be if he were playing in the outfield those days or playing first base, using his arms and legs. Otani did play in the outfield in his rookie year in Japan, and it was easily his worst year as a pitcher and close to his worst as a hitter, though it's hard to separate that variable from his extreme youth. We do know, by the second month of that season, his manager noted that "just from watching him bat, you can see some fatigue." We do also know that at the All-Star break of that season he was batting .310; he ended the season with a .238 batting average, which suggests that exhaustion might have been a factor. We also know that the Nippon-Ham Fighters almost never used him in the outfield again.

How much would a pitcher's risk of injury go up if he were also hitting on his days off?

Obviously, the increased risk would be greater than zero. Every pitch he sees could break his wrist, every sprint to first could lead to a hamstring strain, and every slide could lead to a jammed thumb. Otani's NPB debut on the mound actually was delayed by weeks because he sprained his ankle -- though it was while he was playing in the outfield, not hitting. He missed the World Baseball Classic this spring with an ankle injury he aggravated while running the bases. And he has missed the past two months because of a thigh injury he suffered while running to first.

But again, there's no precedent. We can produce actuarial tables showing the chances of a designated hitter landing on the disabled list over X number of games, but so many of the guys who did in recent years -- Alex Rodriguez, Billy Butler, Victor Martinez, Prince Fielder -- were designated hitters partly because they were already physically worn down, unathletic or otherwise prone to injury. Otani, on the other hand, is young and extremely athletic.

On the other hand, that actuarial table might also understate the injury risk. What might be a small scrape to a DH, costing him only a day or two, might disrupt a pitcher much more, especially if it causes the pitcher to favor any part of his body in his pitching delivery.

Alternately, we could come up with an actuarial table of pitchers injured while hitting and/or running the bases, but few pitchers exert the effort that Otani, as some team's cleanup hitter, would, so he'd be more prone to injury than his pitching peers would be. Or, maybe the opposite: Few pitchers would be as experienced hitting and running the bases as Otani, so he'd be less prone to injury than other pitchers.

What a team gains

At Baseball Prospectus, Russell Carleton found that the value of a Ben Zobrist-type -- a player who is so versatile he opens up enormous roster flexibility for his team's front office -- "probably earns [his team] a couple extra runs per year; maybe if everything breaks right, it's a half a win."

But, of course, Otani isn't a Zobrist-type. He's not providing versatility, especially if he's playing DH, a position that by definition any hitter can fill in a pinch. Rather, he's providing a whole new roster spot that a team could use on a third catcher, high-leverage pinch runner, Rule 5 pick, slugging pinch hitter, 13th reliever or anything else. Once again, there's no precedent. There's nothing for Russell Carleton, or anybody else, to study. It wouldn't be surprising to find out it was worth a couple of runs.

If it's hard to know how good Otani will be as a pitcher in the majors, it's even harder to project his offense. He has recently been nearly as good a hitter, relative to his NPB peers, as he has been a pitcher, but translating Japanese hitting stats to the majors has been notoriously difficult. As one scout told the Ringer's Ben Lindbergh, "The history of non-Ichiro, non-Hideki Matsui hitters coming from that league isn't great. Most recently two league MVPs in [Tsuyoshi] Nishioka and [Hiroyuki] Nakajima came here and were fringe Triple-A players."

Dave DeFreitas scouted the Pacific Rim for the Indians and Yankees before joining 2080baseball.com, where he recently filed a scouting report on Otani as a position player. He labeled the risk high and the realistic role "average everyday right fielder," with stronger grades for his defensive tools than his offensive ones. "Plus makeup kid with a high ceiling offensively," DeFreitas wrote.

If he were limited to DH, playing only two days out of five, he'd have to reach that ceiling to be an impact player. If he were merely average -- if he hit like, say, Kendrys Morales, but with better baserunning -- he'd struggle to add even a full extra win with his bat. If he played more than that, he'd be more valuable, but the extra injury risk and the cost to his pitching performance, if those exist, would also go up, putting more burden on his bat.

This means he'd have to reach his ceiling, which he might. Otani will almost certainly have a higher offensive ceiling than any other DH option his team will have, and if he hits like Edwin Encarnacion, he could easily add two extra wins with his bat, even playing only a few days a week. His team will never know unless it tries.

Therein lies the rub. As DeFreitas continues in his scouting report: "May not reach offensive ceiling as development will be hampered by time spent on the mound."

There are many more small details, many more unknowns, that would factor into an equation that would quickly become dizzyingly convoluted and cluttered with guesses. If Otani weren't a DH but were simply a high-leverage pinch hitter in 80 percent of games, how much value would he have, and at how much risk? Would that pinch-hitting value stagnate if he weren't batting four times a night, though? Would all this be priced into his contract so that it's not really a bargain anyway? There's no precedent for any of this. It's all guesses, and it's guessing with one of the biggest expenditures a team will make, which is why we shouldn't be too surprised if we see Otani -- and Greene and McKay -- ultimately funneled into traditional roles.