Sidney Crosby to sit out 2 games 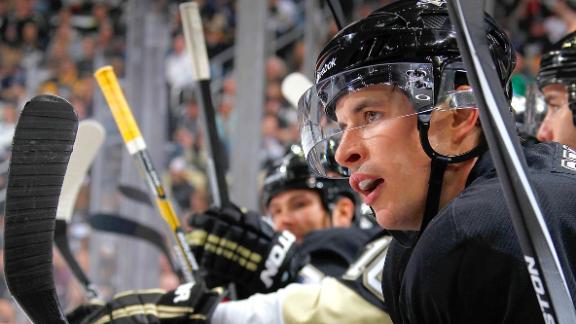 PITTSBURGH -- Penguins center Sidney Crosby will sit out the next two games as a precaution, though general manager Jim Rutherford says it does not appear the star is dealing with mumps.

Crosby will not play Friday night against Calgary or Saturday at Columbus. The two-time NHL MVP participated in Friday morning's skate but acknowledged he had not been feeling well and his right cheek was visibly puffy. Crosby underwent some testing on Friday, with specialists recommending Crosby take a couple of days off.

Crosby leads the Metropolitan Division-leading Penguins with nine goals and 26 assists in 27 games.

Multiple players on NHL teams from coast to coast have come down in recent weeks with mumps, an illness more typically associated with children.

At least 10 players have been diagnosed with mumps this season. Most recently, the Devils announced that both Travis Zajac and defenseman Adam Larsson had mumps. Larsson is still recovering from the disease.

Players on the Anaheim Ducks, New York Rangers and Minnesota Wild have been affected by an outbreak of mumps, as well.

The NHL has sent out instructions and recommendations about how best to treat and prevent the disease, with some teams administering additional vaccines to stave off further infection.

Information from The Associated Press and ESPN.com's Katie Strang was included in this report.