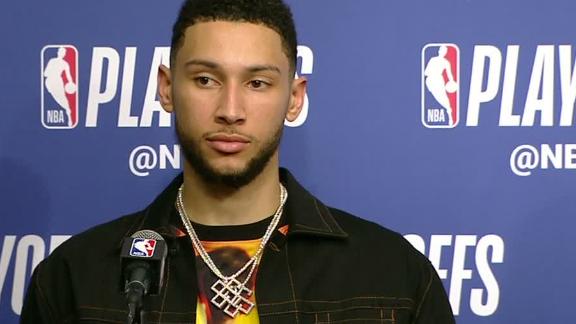 NEW YORK -- Joel Embiid took off his warmup gear and changed into street clothes, his left knee feeling too sore to play.

Even with the All-Star center sitting down, the Philadelphia 76ers were flying high in Game 3.

Ben Simmons scored a career playoff-high 31 points, Tobias Harris added 29 points and 16 rebounds and the 76ers shook off the absence of their leading scorer to beat the Brooklyn Nets 131-115 on Thursday night for a 2-1 lead in the first-round series.

The 76ers relied on Simmons slashing to the basket, and Harris and JJ Redick shooting from the perimeter.

"We have the pieces to get games, to complete games and I think everybody in the organization knows that," Simmons said.

Simmons was 11 for 13 from the field, repeatedly getting to the rim even with the Nets sagging well off him in hopes he would shoot a jumper. He added nine assists and eventually quieted a crowd that loudly booed him every time he touched the ball early.

Harris had his playoff highs in both points and rebounds, and was 6 for 6 from 3-point range. Redick was 5 of 9 behind the arc and finished with 26 points.

Embiid warmed up before the game but the 76ers announced shortly before the start that the All-Star center wouldn't be available because of a sore left knee. Greg Monroe started in his place and had nine points and 13 rebounds.

"Just came in, obviously with Joel down that's a big scoring loss that we had there," Harris said. "So just had to be aggressive from the start."

D'Angelo Russell and Caris LeVert each scored 26 points for the Nets, who host Game 4 on Saturday afternoon. They have dropped the last two games after surprising the No. 3 seed in the opener in Philadelphia.

Energized by a lively Brooklyn crowd seeing playoff basketball for the first time since 2015 and perhaps by the absence of Embiid, who averaged 22.5 points and 12.5 rebounds in the first two games, the Nets started well but then stalled. They went about 4 1/2 minutes without a basket and Philadelphia took advantage to lead 32-24 after one.

"When, arguably, their best player sits out, you have to take advantage of that and we just couldn't perform on it," Nets center Jarrett Allen said.

The lead quickly went into double digits in the second before LeVert got going. He scored six straight points and had Brooklyn's first 14 of the period to tie it at 38. The 76ers regained control and opened an 11-point lead with about 2 1/2 minutes remaining before halftime, but LeVert had another burst to cut Philadelphia's lead to 65-59 at the break. He finished with 19 points in the period.

Redick hit a pair of 3-pointers sandwiched around Harris' three-point play, pushing it to 81-67, and another 3 by Redick had the Sixers leading 97-81 with 1:16 left in the third. But a four-point play by Spencer Dinwiddie highlighted Brooklyn's run of nine straight points to end the period and trim it to 97-90.

The Nets cut it to six in the fourth on Russell's 3-pointer, but the 76ers soon pulled away again.

It was another poor defensive effort by the Nets, who allowed just 102 points in Game 1 but an average of 138 in the last two games.

"We didn't do a good enough job of getting stops," guard Joe Harris said. "You can't have three guys go for 30 and expect to win games."

76ers: Simmons was 5 for 5 on free throws when the Nets fouled him intentionally with 3:38 remaining. He missed both, but hit two on the next possession and finished 9 for 11. ... Monroe didn't even make his Sixers debut until April 6.

Nets: Brooklyn was 8 for 39 (20.5%) from 3-point range. Joe Harris, who led the league in 3-pointer percentage, missed all four of his attempts. ... LeVert's 19 points were the most he scored in any quarter of his career. ... The Nets had won their last three Game 3s.

Game 4 is Saturday in Brooklyn.

Simmons on Dudley: I don't have energy for it
Ben Simmons deflects questions on his beef with Jared Dudley and emphasizes that he's not "worried about it."
Report a correction or typo
Related topics:
sportsespnphiladelphia 76ersnbabrooklyn nets
Copyright © 2020 ESPN Internet Ventures. All rights reserved.
More Videos
From CNN Newsource affiliates
TOP STORIES