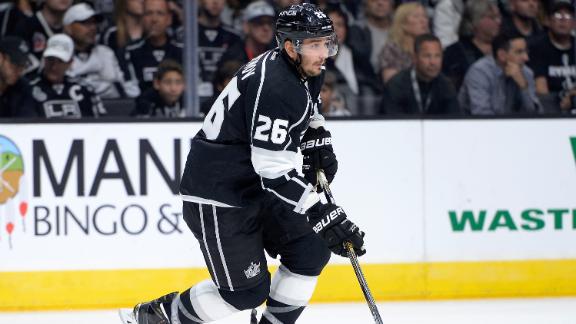 ESPN
Slava Voynov was arrested Monday morning on domestic violence charges and has been suspended indefinitely from the Los Angeles Kings pending a formal investigation by the NHL.

Officers responded to a house in Redondo Beach around 2:25 a.m. ET (11:25 p.m. PT) after a neighbor called police, saying a women was screaming for "the past 20 minutes and could now be heard crying," according to a news release from the Redondo Beach Police Department.

The release said officers responded and found no one in the house, but around 90 minutes later, received a call from nearby Torrance policy saying a woman was being treated at Little Company of Mary Hospital for "injuries that were possibly received during a domestic violence incident."

Reached via email, Redondo Beach city prosecutor Melanie Chivara told ESPN.com that Voynov was the subject of a felony arrest for domestic violence charges. He will next appear in court Dec. 1 in Torrance, California. His case will first be reviewed by the district attorney's office for felony consideration, Chivara said.

"These developments are of great concern to our organization," the Kings said in a statement. "We support the NHL's decision to suspend Slava Voynov indefinitely during this process, and we will continue to take appropriate action as the legal proceedings and the investigation by the NHL take their course."

Voynov's lawyer, Craig Renetzky, declined to divulge any further details about the case but stressed that charges have not yet been filed.

"It's very early in the stages and no charges have been filed," Renetzky told ESPN.com when reached by phone Monday afternoon. "That doesn't mean charges will be filed or are warranted in this case. We're conducting our own investigation to determine what happened."

The woman involved sustained injuries that were treated at a local hospital, police said.

The suspension was announced by the NHL after it consulted with the NHL Players Association. The collective bargaining agreement between the league and its players says that, during a criminal investigation, "the League may suspend the Player pending the League's formal review and disposition of the matter where the failure to suspend the Player during this period would create a substantial risk of material harm to the legitimate interests and/or reputation of the League."

Hedges said he was working on gathering more information about the situation.

Voynov will continue to be paid during the suspension. He has two assists in six games this season -- his fourth with the Kings. Voynov is 24.

When asked about the issue of domestic violence at the beginning of this season, commissioner Gary Bettman said the league had been working with the union on the policy for over a decade.

"We as a league have more than enough authority and mechanisms to punish, if necessary, in the appropriate case. Fortunately we haven't seen too many. But more importantly we focus on counseling and education, and in the joint programs we have with the Players' Association we've been counseling and educating on domestic violence for more than a decade, I don't remember the exact date," he said. "The security department does it in their annual meetings with each team, and the behavioral counselors from the substance abuse, behavioral health program also counsel and educate the players on those and many other issues.

"So I'm not sure for us there is any need for any code of conduct other than our players, who overwhelming conduct themselves magnificently off the ice -- we deal with it on a case by case basis. I don't think we need to formalize anything more. Our players know what's right and wrong, and as I said, we have the mechanisms in place to hopefully not get to that point."

Last season, Colorado Avalanche goalie Semyon Varlamov was involved in a domestic violence charge involving his girlfriend, but was able to travel and play with the team while the case went through the judicial system.

Varlamov's girlfriend, Evgeniya Vavrinyukat, told police he knocked her down with a kick, stomped on her chest and dragged her by her hair at their apartment on Oct. 30, according to an arrest affidavit.

When asked about the different treatment of Varlamov and Voynov, deputy commissioner Bill Daly told ESPN.com's Pierre LeBrun in an email: "The facts and circumstances are different."

ESPN.com's Katie Strang and Arash Markazi, ESPN The Magazine's Craig Custance and The Associated Press contributed to this report.