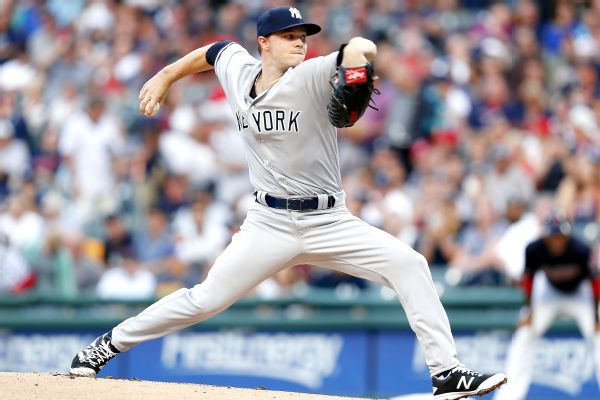 CLEVELAND -- Newly acquired starter Sonny Gray was not bad in his initial Yankees start, but the defense behind him was terrible and he had trouble matching Indians ace Corey Kluberas Cleveland beat New York 5-1.

Gray -- who was acquired by the Yankees from the Oakland Athletics some 90 minutes prior to Monday's trade deadline -- went six innings, allowing four runs (two earned) on four hits. He struck out six and walked four, dropping to 6-6 on the season with the loss.

When he left in the seventh inning, he and the Yankees were down 4-1 largely because of Kluber's dominance. The right-hander recorded his 11th 10-strikeout game of the season, third-most in the league behind Chris Sale and Max Scherzer, per ESPN Stats & Information research.

"He was really sharp," Girardi said of Kluber.

The Indians scored their two first-inning runs with the help of three Yankees errors.

"That's probably as bad a first inning that we've had all year. It leads to two unearned runs. It leads to extra pitches,'' Girardi said.

In the sixth inning, Gray gave up two earned runs on a Yan Gomes two-run double. Gomes' hits were preceded by a two-out single and a walk. Gomes just missed hitting a home run, as the line drive slammed high on the tall wall in left at Progressive Field.

"I felt like I threw the ball OK, but at the same time, if I can shut that sixth inning down, it could've been a completely different ballgame," Gray said.

Gray, 27, entered the game on a hot streak -- he had a 1.37 ERA in his last six starts with the A's. One of those starts was against Cleveland, against whom he threw six scoreless innings.