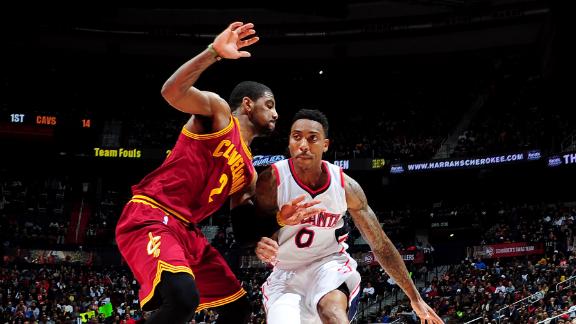 LeBron Jamesdid not play Tuesday against the Atlanta Hawks because of soreness in his left knee, according to Cleveland Cavaliers coach David Blatt.

James already missed one game this season because of the injury -- a marquee matchup against Kevin Durant and the Oklahoma City Thunder -- and now will miss the chance to play on his 30th birthday.

James intended to play before shootaround Tuesday morning and talked to reporters about the occasion of playing on his birthday, but sometime between then and gametime the Cavs decided to rest the 12-year veteran.

"It's been an on-going process all day pretty much," Blatt said of the decision to sit James out.

James aggravated his knee and left hamstring on Christmas Day in Miami when he landed awkwardly after jumping over the first row of courtside seats while trying to chase down an outlet pass from Kevin Love.

"It's been sore and it's bothering him," said Blatt.

James is also dealing with a quad contusion but Blatt said that it is unrelated to the four-time MVP's sore knee. Late in the second quarter of the Cavs' 103-80 loss to the Detroit Pistons on Sunday, James was kneed in his left quad by a Pistons player and had to go to the locker room before halftime began to receive treatment.

"Put that on my checklist of injuries so far," James said after the game Sunday.

"Hopefully he feels better tomorrow but obviously we want to get him right and feeling fully healthy so he can play the game the way he knows how to play," Blatt said.