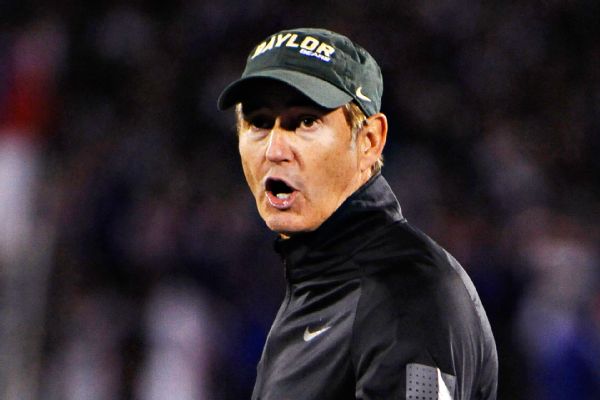 When Auburn hires a new offensive coordinator, this much is certain: It will not be former Baylor coach Art Briles.

Briles will not be considered for the position because of his role at Baylor in the school's sexual assaults scandal, a source told ESPN.

Auburn is seeking an offensive coordinator after Rhett Lashlee joined UConn's coaching staff Wednesday. Briles was speculated as a candidate because of his friendship with Auburn coach Gus Malzahn and because former Baylor quarterback Jarrett Stidham transferred to Auburn last month.

A source told ESPN it's "wide open" on who will be Lashlee's replacement.

Briles is one of Malzahn's closest friends in the coaching industry and was a guest speaker at Malzahn's coaches clinic in April 2015. Last February, Malzahn visited Briles in Waco, Texas, to discuss football and they attended a Baylor basketball game together. Briles was fired at Baylor three months later.

Briles was interested in replacing Tom Herman as coach at Houston, his alma mater, but the school released a statement indicating Briles would not be interviewed for the position.

Briles has filed a lawsuit against three school regents and its vice president, accusing them of falsely claiming he knew of the sex crimes and that he failed to give that information to the proper agencies.
Related topics:
sportsespnart briles gus malzahnbaylor bearsauburn tigers
Copyright © 2020 ESPN Internet Ventures. All rights reserved.
More Videos
From CNN Newsource affiliates
TOP STORIES