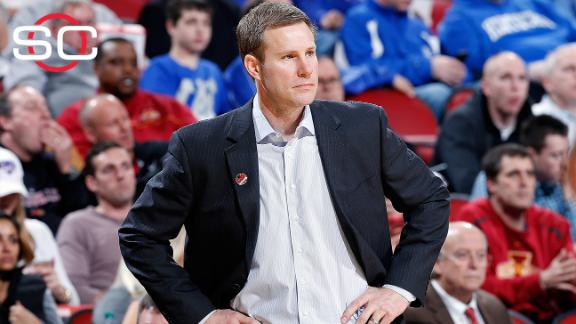 Fred Hoiberg has informed several Iowa Stateplayers and staff members that he is leaving, a source told ESPN.com's Jeff Goodman.

Hoiberg is in negotiations with the Chicago Bulls for a five-year contract to become their new coach and was en route to Chicago on Monday to finalize the agreement, according to the source.

Although contract language is still being hammered out, multiple sources said the feeling from many within the Bulls' organization is that the deal is all but complete.

On Monday night, the Bulls informed media that the team will make a "major announcement" Tuesday at 3 p.m. ET.

Hoiberg has been mentioned as a successor to Tom Thibodeau for months because of Hoiberg's close friendship with Bulls general manager Gar Forman and several others in the team's front office. Thibodeau was fired Thursday after five seasons with the Bulls. He had two years and almost $9 million left on his contract.

Hoiberg, 42, spent four of his 10 seasons in the NBA playing for the Bulls. He is respected throughout the league for the success he has had at his alma mater, but his move from Ames to Chicago has been expected for a while.

Hoiberg coached the Cyclones to the NCAA tournament in the last four of his five seasons. Iowa State reached the Sweet 16 in 2014 and won more than 25 games in each of the past two seasons; Hoiberg has won 115 games total in his five seasons at the school. He signed a 10-year deal with the Cyclones in April 2013.

Chicago fans skeptical of Hoiberg hire
Nick Friedell discusses how the Bulls' choice of Fred Hoiberg as coach is being perceived in Chicago and the challenges facing Hoiberg as he takes over.

Why Hoiberg is right choice for Bulls
Jeff Goodman explains why the Bulls decided on Fred Hoiberg as their coach and identifies the key for him and the Bulls to make it work.

Is Hoiberg a good fit in Chicago?
Stephen A. Smith explains why he is concerned and fans should be frustrated with Chicago's front office history with coaches.