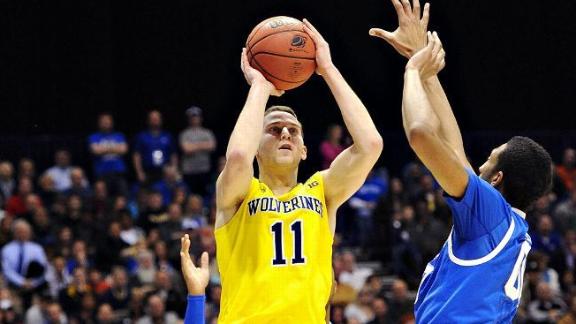 Michigan sophomore Nik Stauskas is headed to the NBA, a source close to the situation told ESPN.com on Thursday.

The source said the 6-foot-6, 205-pound shooting guard intends to make a public announcement soon. Stauskas has said on Twitter that he has not yet made a decision.

Just wanted to reiterate that any reports about my future intenions are FALSE! I have NOT made ANY decisions on my future yet!

- Nik Stauskas (@NStauskas11) April 10, 2014Stauskas, who hails from Canada, had a breakout season, averaging 17.5 points while shooting 44 percent from 3-point range and 82 percent from the free throw line.

After averaging 11 points as a freshman on a Wolverines team led by Trey Burke that lost to Louisville in the 2013 national title contest, Stauskas became the go-to guy this season. The Wolverines advanced to the Elite Eight despite losing Burke and Tim Hardaway Jr. and seeing starting big man Mitch McGary suffer a season-ending back injury early in the season.

The Wolverines could also lose McGary and Glenn Robinson III, who are weighing whether to leave early for the NBA draft.

In addition, center Jon Horford is planning to transfer for his final season of eligibility, the school announced Thursday. He averaged 3.8 points a game this season filling in for McGary.

Michigan finished the season 28-9 overall and 15-3 in Big Ten play.