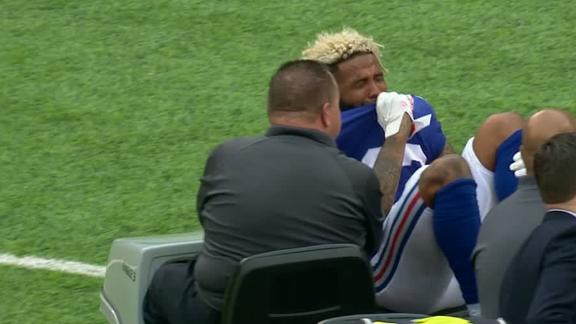 A source told ESPN that Beckham will get a second opinion before deciding on surgery to repair the injury. It is the same ankle that Beckham injured during the preseason.

He left the stadium on a cart with a boot on his left leg.

Beckham was carted off the field after he suffered the injury with four minutes remaining in the loss, which dropped the Giants to 0-5. He had gone up for a catch and fell awkwardly to the ground, and Chargers players immediately called for medical help.

Beckham was in serious pain as he left the field. He had a towel over his head and appeared to be in tears.

"Obviously, you never want to see any receiver go down, and it looked like he was in some pain," Giants quarterback Eli Manning said. "So I just told him I'd be thinking about him. And obviously, we don't know the severity of it, but hopefully he'll be OK."

Beckham had five catches for 97 yards and a score before the injury. His 48-yard touchdown reception early in the fourth quarter gave the Giants a lead they couldn't protect once he left.

Manning fumbled deep in his own territory on the play after Beckham was taken off on the cart.

"That's rough. He's our best player," cornerback Eli Apple said. "He's a brother to everybody and somebody we really care about. That is kind of tough."

Beckham was the fourth Giants wide receiver injured against the Chargers.

Brandon Marshall was carted off in the second quarter with an ankle injury just moments after Sterling Shepard limped off the field with an ankle injury. Both Marshall and Shepard were ruled out for the second half.Dwayne Harrisleft on a cart early in the third quarter with a fractured foot. Harris is out for the season, a source told ESPN's Adam Schefter.

Roger Lewis was the only wide receiver available by the time the Giants were trying to mount a comeback in the final minutes. Engram was forced to play wide receiver.

"Yeah, I mean, it significantly altered the game," Giants coach Ben McAdoo said. "We had one receiver left at the end of the ballgame."

Marshall attempted to make a catch deep down the right sideline and hurt his left leg when he came down awkwardly out of bounds. He had his left cleat off as he was taken to the locker room on a cart. A source told Schefter that Marshall suffered a sprained ankle.

Shepard was injured when he was hit hard over the middle earlier on the same drive. The second-year wide receiver came into Sunday's game leading the Giants with 21 catches for 254 yards and a touchdown.Shepard had one catch for 9 yards against the Chargers.

Marshall, who was a key acquisition this offseason, started the season slowly. He had 16 catches for 139 yards in his first four games with the Giants. He had two catches for 15 yards before leaving Sunday's game with the injury.

King was released several weeks back after spending the previous two seasons with the Giants. He caught a 41-yard touchdown in a playoff loss to the Packers back in January.

Rudolph is a rookie out of Florida State. He had a strong preseason before spending the first five weeks on the practice squad.