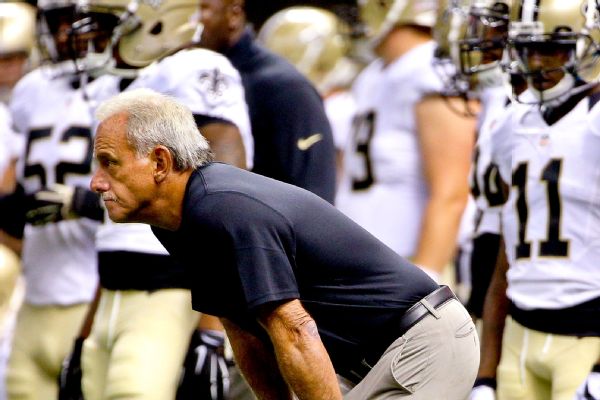 METAIRIE, La. -- Longtime NFL assistant Joe Vitt was among the casualties on Thursday as the New Orleans Saints made the most sweeping changes to their coaching staff in the 11 years since Sean Payton was hired as head coach, a source confirmed.

Sporting News first reported that the Saints either fired or mutually parted ways with at least five assistants, including Vitt and special-teams coordinator Greg McMahon, both of whom had been with Payton since he arrived in January 2006. Longtime defensive line coach Bill Johnson, assistant special-teams coach Stan Kwan and linebackers coach James Willis also have been let go.

The moves would seem to indicate that Payton is indeed staying as the Saints' head coach, despite reports of Payton's possible interest in the Los Angeles Rams' job.

And they are an indication that the status quo won't be tolerated any longer after three straight 7-9 seasons in New Orleans.

Vitt is the biggest surprise on the list, because he had been arguably Payton's most trusted deputy throughout his tenure in New Orleans. Vitt was both a linebackers coach and an assistant head coach, who often addressed the team on Saturdays before games. And he served as an interim head coach during Payton's 2012 suspension as part of the Bountygate penalties -- once Vitt was finished serving his own six-game suspension that season.

The cantankerous Vitt is an NFL lifer who has spent 38 years as an NFL assistant, dating back to his debut with the Baltimore Colts in 1979. He worked for seven teams and served as an interim head coach with the St. Louis Rams in 2005.

Countless Saints players have sworn by Vitt as one of their most beloved coaches -- though he has arguably been more valuable in his role as an assistant head coach than as a coach of linebackers, where the team has struggled to develop young talent for more than a decade.

The latest flop was 2015 first-round draft choice Stephone Anthony, who went from starting all 16 games at middle linebacker in 2015 to barely playing in 2016.

The Saints have notoriously had one of the worst defenses in the NFL throughout the Payton-Drew Brees era, burning through five defensive coordinators over that span.

Johnson also has been a key member of New Orleans' staff since he arrived during the Saints' 2009 Super Bowl season. The Saints have developed a little more standout talent on the defensive line since then, including two-time Pro Bowler Cameron Jordan. But the pass rush has been as inconsistent as the overall defense over the past decade.

The departures of McMahon and Kwan are less surprising, considering the Saints' epic woes on special teams this past season. They lost three games that included either blocked kicks returned for scores or a botched punt return. And Payton hired veteran special-teams coach Kevin O' Dea as an extra set of eyes after Week 11, with a particular emphasis on working with undrafted rookie place-kicker Wil Lutz. Lutz never missed another kick after that point.

With Vitt and McMahon being let go, offensive coordinator Pete Carmichael Jr. remains the only assistant who has been with the Saints throughout Payton's entire tenure.