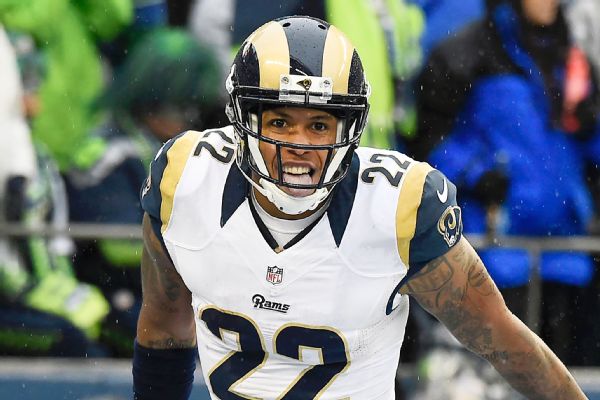 The contract terms weren't immediately available. Johnson intends to sign his deal after 4 p.m. Wednesday, when the league year begins, according to the source.

Williamson, 26, was a tackling machine for a Titans defense that was fourth in run defense last season, finishing second on the team with 92. He led the team in tackles in two of his four seasons (2015 and '16, when he finished with 102 and 103, respectively) and was in the top three in all four seasons. He also has 11.5 sacks in his career.

Williamson's arrival likely means the Jets will move on from middle linebacker Demario Davis, a free agent. The two sides had been in talks, but there was a considerable gap, a source said. Davis started every game and played every defensive snap last season after returning to the Jets in a June trade with the Cleveland Browns. He was drafted by the Jets in 2012.

The addition of Johnson is an important one for the Jets, whose system is predicated on man-to-man coverage by the corners. Before landing Johnson, they had only one starting-caliber corner under contract, Buster Skrine, who is best suited to the No. 3 role.

Johnson posted a farewell to the Rams on his Instagram account Monday. He will be reunited with secondary coach Dennard Wilson, who was his position coach with the Rams through 2016.

Johnson, 28, spent the past two years as the Rams' primary cornerback and played under the franchise tag in both those seasons, his salary jumping to $16.74 million in 2017. He was arguably the best corner available on the free-agent market this offseason, mainly because of his size, his ability to match up with elite receivers and his track record for staying healthy.

But Johnson also spent a lot of time shadowing the likes of Pierre Garcon, Dez Bryant, Marqise Lee, Larry Fitzgerald, DeAndre Hopkins, Michael Thomas and Alshon Jeffery in 2017. Those seven combined to catch only 57.7 percent of their targets when Johnson was responsible for covering them, nearly 8 percentage points below the NFL average, according to numbers compiled by ESPN.

A third-round pick out of Montana in 2012, Johnson has 18 interceptions and 42 pass breakups over the past six seasons, playing in 85 of a potential 96 regular-season games. During that time, he has proved capable of playing on both sides of the field.