Sources: Knicks have discussions about trading for Derrick Rose 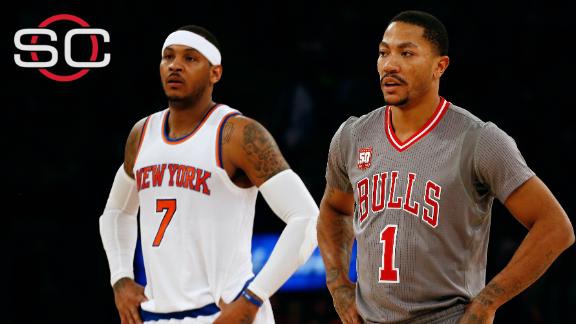 The New York Knicks are looking to upgrade their backcourt, and one player on their radar is Chicago Bulls point guard Derrick Rose.

The Knicks have had internal discussions recently about trading for Rose, league sources tell ESPN.

The Bulls' interest in trading Rose, 27, is unknown at this point. The Knicks do not have many strong trade chips outside of Carmelo Anthony, Kristaps Porzingis and future first-round draft picks.

Both Knicks coach Jeff Hornacek and GM Steve Mills have said that the Knicks are interested in upgrading their point guard position in the offseason. The Knicks' incumbent starting point guard is Jose Calderon, while other potential point guards include second-year guard Jerian Grant and free-agent signee Tony Wroten.