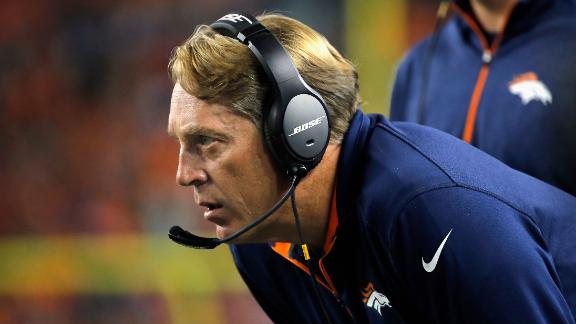 The Oakland Raiders are closing in on naming Denver Broncos defensive coordinator Jack Del Rio as their next head coach, with an announcement expected to happen as early as Wednesday, league sources told ESPN.

The other finalist for the job was Tony Sparano, who was the interim coach for the final 12 games of the season.

Del Rio coached the Jacksonville Jaguars from 2003 to 2011, compiling a 68-71 record while twice guiding the team to the playoffs. He also served as interim coach of the Broncos in 2013 when then-head coach John Fox had health issues.

Del Rio, who initially met with Mark Davis on Jan. 4, grew up in the East Bay Area, and his family is longtime Raiders season-ticket holders.

The Hayward, California, native, was hired by the Broncos after Dennis Allen left the team following the 2011 season to become the Raiders' head coach. Del Rio, if hired in Oakland, would be replacing Allen, who was fired earlier this season.

The Broncos finished No. 3 in total defense this season and led the league in forcing three-and-outs. In 2012, Del Rio's first season in Denver, the Broncos were No. 2 in overall defense, No. 4 in scoring defense and tied for the league lead in sacks.

Oakland has had eight coaches since the start of the 2003 season. The Raiders have not had a winning record or playoff berth in that span as the constant turnover has contributed to the struggles on the field.

Sparano, who went 3-9 in place of Allen, was formerly the head coach in Miami.

The Raiders have hired only three coaches -- Joe Bugel, Norv Turner and Art Shell in his second stint -- who had previously been head coaches on professional teams, as Al Davis often preferred young up-and-comers over retreads.

Jeff Legwold and Bill Williamson of ESPN.com and The Associated Press contributed to this report.